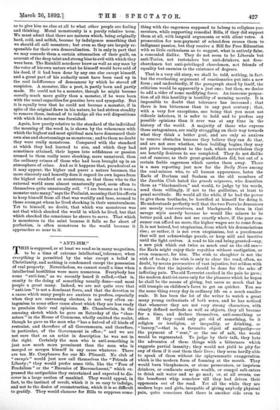 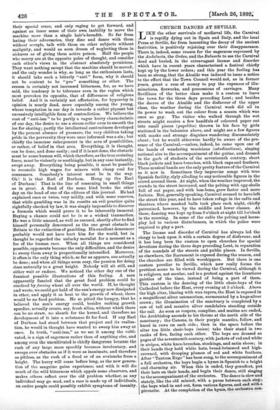 THIS is supposed, or at least we read so in many magazines, to be a time of extreme intellectual; tolerance, when everything is permitted by the wise except a belief in Christianity, and nothing is condemned except the possession of real property. Nevertheless, we cannot recall a time when intellectual hostilities were more numerous. Everybody has some "anti-ism," as we recently heard it called,ŌĆöthat is, enmity to the doing of something usually doneŌĆöand most people a great many. Indeed, we are not quite sure that " anti-ism " is not a dominant force, and that the devotion to a cause which many people are anxious to profess, especially when they are canvassing electors, is not very often an- tagonism to some other cause about which they are less ready to proclaim their real opinions. Mr. Chamberlain, in the amusing sketch which he gave on Saturday of the " char- acters " in the House of Commons, wholly omitted the zealot, though he gave us the man who "has a hatred of all kinds of restraint, and therefore of all Governments, and therefore, in particular, of the Government in office ; " and we are not sure that as an artist in description he was not in the right. Certainly the man who is anti-something is just now much more prominent than the man who is merged or merges himself in any cause whatever. There are ten Mr. Conybeares for one Mr. Plimsoll. No club of " enrages " would just now call themselves the "Friends of Liberty;" they would prefer some title, like the "Foes of Feudalism" or the "Enemies of Encroachment," which ex- pressed the antipathies they entertained and expected to dis- cover in a large section of mankind. They would appeal, in fact, to the instinct of revolt, which it is so easy to indulge, and not to the desire of reconstruction, which it is so difficult to gratify. They would clamour for Bills to suppress some-

thing with the eagerness supposed to belong to religions per- secutors, while supporting remedial Bills, if they did support them at all, with languid arguments or with silent votes. A prosecution for non-payment of school-fees rouses them to indignant passion, but they receive a Bill for Free Education with so little enthusiasm as to suggest, what is entirely false, a concealed dislike. They do not seem to be Liberals but anti-Tories, not teetotalers but anti-drinkers, not free- churchmen but anti-privileged churchmen, not friends of equality but enemies to the existence of degrees.