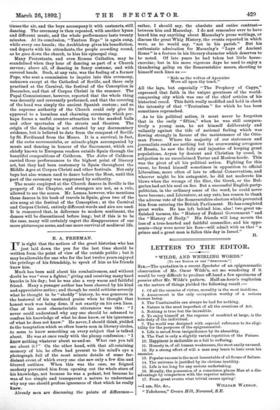 [TO THS EDITOR OF THE "SPECTATOR."]

SIR,—The quotation in a recent Spectator of an epigrammatic observation of Mr. Oscar Wilde's, set me wondering if it would be very difficult to produce off-hand a few specimens of pensees after Mr. Wilde's pattern. Half-an-hour's cogitation on the nature of things yielded the following result :—

1. Of all the enemies of virtue, morality is the most insidious.

2. Amusement is the only occupation worthy of a serious human being.

3. The Unattainable can always be had for nothing.

4. Nature is the most imperfect of all the creations of Art.

5. Nothing is true but the incredible.

6. To enjoy himself at the expense of mankind at large, is the sole duty of the individual.

7. The world was designed with especial reference to its eligi- bility for the purposes of the epigrammatist.

8. Life is saved from insignificance by its absurdity.

9. The Past is only a slightly varied repetition of the Future.

10. Happiness is endurable as a foil to suffering.

11. Honesty is, of all human weaknesses, the most easily excused.

12. By a strong effort of will a man may learn to hate even his enemies.

13. Popular success is the most lamentable of all forms of failure.

14. The universe is justified by its obvious inutility.

15. Life is too long for any serious undertaking.

16. Morally, the possession of a conscience places Man at a dis- advantage by comparison with the superior animals.