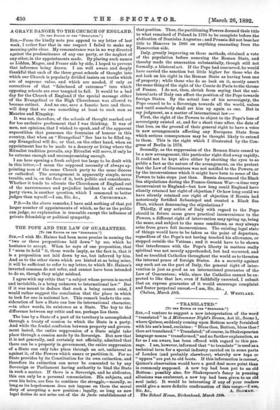 THE POPE AND THE LAW OF GUARANTEES. [To THE EDITOR

SIR,—I wish Mr. Haines had been more precise in naming the "two or three propositions laid down" by me, which he hesitates to accept. When he says of one proposition, that I "seem to hold" it, those words imply, as the fact is, that it is a proposition not laid down by me, but inferred by him. And as to the other views which are hinted at as being mine, it will be sufficient to refer to my letter, to which Mr. Haines's inverted commas do not refer, and cannot have been intended to do so, though they might mislead.

I agree with my critic that "a subject whose person is sacred and inviolable, is a being unknown to international law." But if it was meant to deduce that such a being cannot exist, I would rather suggest the conclusion that the place in which to look for one is national law. This remark leads to the con- sideration of how a State can lose its international character, —in other words, its existence as a State. The key to the difference between my critic and me, perhaps lies there.

The loss by a State of a part of its territory is accomplished through a treaty of cession to which the State is a party. And while the feudal confusion between property and govern- ment lasted, the entire suppression of a State might take place through a cession made by its Sovereign. But now that it is not generally, and certainly not officially, admitted that there can be a property in government, the entire suppression of a State can only take place through an act, unilateral as against it, of the Powers which annex or partition it. For no State provides by its Constitution for its own extinction, and therefore its extinction can never be consented to by any Sovereign or Parliament having authority to bind the State in such a matter. If there is a Sovereign, and he abdicates, this can only be a personal renunciation. His subjects, and even his heirs, are free to continue the struggle,—morally, so long as its hopelessness does not impose on them the moral duty of accepting a new position ; legally, so long as new legal duties do not arise out of the de facto establishment of that position. Thus, the partitioning Powers deemed their title to what remained of Poland in 1795 to be complete before the abdication of Stanislas Augustus ; and Prussia did not base her title to Hanover in 1866 on anything emanating from the Hanoverian side.

Italy, greatly improving on these methods, obtained a vote of the population before annexing the Roman State, and thereby made the annexation substantially, though still not formally, a bilateral act. If the Pope had concurred, he would have carried the sanction but little higher for those who do not look on his right in the Roman State as having been one of property ; while those who do so look on it, mostly assert the same thing of the right of the Comte de Paris to the throne of France. I do not, then, shrink from saying that the uni- lateral acts of Italy can affect the position of the Pope towards foreign States. By the actual loss of his sovereignty, the Pope ceased to be a Sovereign towards all the world, unless and until somebody shall set him up again as one. But in my judgment, as a matter of international law :— First, the right of the Powers to object to the Pope's loss of sovereignty existed at, and for a short time after, the date of that loss, on the ground of their general right to have a voice in new arrangements affecting any European State from which serious consequences may be thought likely to extend to them. This is the right which I illustrated by the Con- gress of Berlin in 1878.

Secondly, as the suppression of the Roman State ceased to be a new arrangement, this particular right died away rapidly.. It could not be kept alive either by shutting the eyes to so public a fact as the nature of the arrangement, on the pretext that the Law of Guarantees was not notified to the Powers, or by the inconvenience which it might have been to some of the Powers to take steps just then. Russia denounced the Black Sea stipulations during the Franco-German War—a time very inconvenient to England—but bow long could England have silently retained her right of objection ? Or how long could we have silently retained our right of objection if Russia had notoriously fortified Sebastopol and created a Black Sea Fleet, without denouncing the stipulations?

Thirdly, if any action of Italy with regard to the Pope should in future cause grave practical inconvenience to the Powers, a different right of intervention may spring up, being the same, and subject to the same conditions, as may always arise from grave felt inconvenience. The existing legal state of things would have to be taken as the point of departure, regardless of the Pope's not having touched his allowance, or stepped outside the Vatican ; and it would have to be shown that interference with the Pope's liberty in matters really spiritual was not merely apprehended, but had occurred, and had so troubled Catholics throughout the world as to threaten the internal peace of foreign States. As a security against any such act on the part of Italy, the general right of inter- vention is just as good as an international guarantee of the Law of Guarantees; while, since the Catholics cannot be ex- pected to like that law, even if faithfully executed, I submit that an express guarantee of it would encourage complaint and foster perpetual unrest.—I am, Sir, &c.,