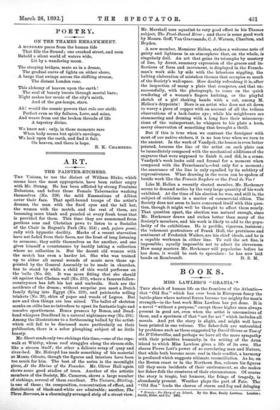 THE Visions, to use the dialect of William Blake, which seems here the most appropriate, have been rather angry with Mr. Strang. He has been afflicted by strong Feminine Delusions, and before those Female Tabernacles washing themselves (No. 238) the mild Emanations of Albion cover their face. That spell-bound troupe of the artist's dreams, the man with the fixed eyes and the tall hat, the woman with the mutch, and the rest of them, are becoming more blank and puzzled at every fresh treat that is provided for them. This time they are summoned from perilous seas and Christian pews to listen to a Socialist of the Chair in Regent's Park (No. 254) ; and, pejora passi, rally with hypnotic docility. Marks of a recent starvation have not faded from their faces, nor the frost of long listening to sermons; they settle themselves as for another, and one gives himself a countenance by hastily taking a collection where no collection is. But the decent old woman with the mutch has even a harder lot. She who was trained up to abhor all carnal sounds of music save those ap- pointed by the General Assembly to be made in churches, has to stand by while a child of this world performs on the 'cello (No. 60). It was more fitting that she should sit against that Chelsea wall (No. 270), where a famous fellow- countryman has left his hat and umbrella. Such are the accidents of the dream ; without surprise you meet a Dutch family flying into Egypt (No. 219), and patriarchs selling trinkets (No. 38), skies of paper and woods of Legros. But now and then things are less mixed. The ballet of skeleton monks on stilts has no intruders to upset its fantastic logic and macabre sportiveness. Bones prances by Bones, and Dead- head whispers Deadhead in a natural nightmare way (No. 281). Among the illustrations to a forthcoming ballad by the artist, which will fall to be discussed more particularly on their publication, there is a sober ploughing subject of no little beauty.

Mr. Short sends only two etchings this time,—one of the rope- walk at Whitby, whose roof straggles along the stream-side, like a stream itself ; the other a delicate scrap of quay and river-bed. Mr. Holroyd has made something of his material at Monte Oliveto, though the figures and interiors have been too much for him. The best of the series is the moonlight piece, At the Shrine of the Founder. Mr. Oliver Hall again shows some good studies of trees. Another of the artistic members of the Society, Mr. Cameron, shows a large number of etchings, several of them excellent. The Unicorn, Stirling, is one of these ; its composition, concentration of effect, and distribution of black-and-white are admirable; another, The Three Barrows, is a charmingly arranged strip of a street view. Mr. Marshall uses aquatint to very good effect in his Thames subject, The Frost-Bound River ; and there is some good work by Messrs. Goff, Van Gravesande, C. J. Watson, Charlton, and Bryden.

A new member, Monsieur Hellen, strikes a welcome note of gaiety and lightness in an atmosphere that, on the whole, is singularly dull. An art that gains its triumphs by mastery of line, by direct, summary expression of the graces and in- flections of form and movement, is displayed in the French- man's work side by side with the laborious niggling, the halting elaboration of mistaken themes that occupies so much of the Society's wall-space. How doubly refreshing it is, after the inspection of many a plate that competes, and that un- successfully, with the photograph, to come on the quick rendering of a woman's fingers knitting, or the playful sketch of a girl shaking hands with a cat, among M. Helleu's drypoints ! Here is an artist who does not sit down to worry a piece of copper with an account of all the tedious observations of a lack-lustre eye ; while his neighbours are stammering and droning with a long face their misconcep- tions of the unimportant, he whispers to his plate a keen, merry observation of something that brought a thrill.

But if this is true when we contrast the foreigner with most of our native etchers, it is no less true when we turn to the ancient. In the work of Vandyck, the lesson is even better pointed, because the line of the artist on each plate can be immediately compared with the mechanical additions of the engraver that were supposed to finish it, and did, in a sense. Vandyck's work looks cold and formal for a moment when compared with the Frenchman's,—but only for a moment ; the assurance of the line is only equalled by its subtlety of expressiveness. What drawing in the room can be spoken of beside work like the Francis Snyders or the Pau/ de Vos ?

Like M. Hellen a recently elected member, Mr. Herkomer seems to demand notice by the very large quantity of his work exhibited. At the time of his election he was, and still is, the subject of criticism in a matter of commercial ethics. The Society does not seem to have concerned itself with this ques- tion, though it might well be thought to affect them nearly. That question apart, the election was natural enough, since Mr. Herkomer draws and etches better than many of the Society's members, and his work is likely to add to the popu- larity of its exhibitions. He is prolific, vigorous, insistent ; the vehement portraiture of Frank Roll, the prettiness and sentiment of Frederick Walker, are his chief ideals, and he is a capable workman in either line. To call the art fine, is impossible; equally impossible not to admit its cleverness. How many masters Mr. Herkomer will popularise before he has done, it would be rash to speculate : he has now laid