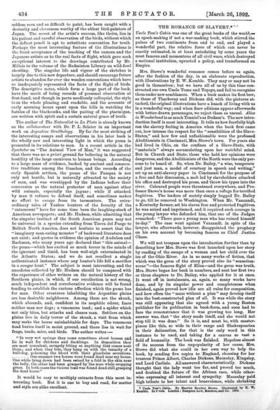 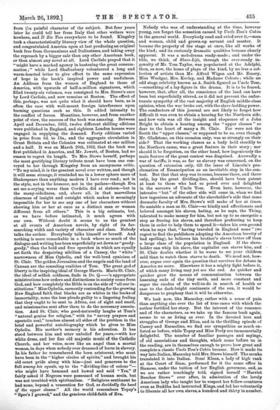 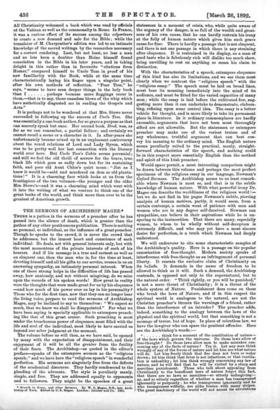 THE ROMANCE OF SLAVERY.*

Uncle Tom's Cabin was one of the great books of the world,- an epoch-making if not a war-making book, which stirred the pulses of two continents from end to end, and played a wonderful part, the relative force of which can never be exactly estimated, in at least antedating by some years the most famous and momentous of all civil wars, which destroyed a national institution, uprooted a policy, and transformed an Empire.

Mrs. Stowe's wonderful romance comes before us again, after the fashion of the day, in an elaborate reproduction, with illustrations by E. W. Kemble. They may or may not be good in themselves ; but we have all of us by this time con- structed our own Uncle Toms and Topsys, and fail to recognise them under new semblances. When a book makes its first bow, as those of Thackeray and Dickens did, with the pictures at- tached, the original illustrations have a knack of living with us in a wonderful way; and when finer editions appear afterwards with better-drawn personages, we reject them as unreal. Alice in Wonderland is as much Tenniel's as Dodson's. The new intro- duction itself is most interesting. It tells us how fearfully high ran the slavery feeling in America when the book first came out, how intense the respect for the "sensibilities of the Slave- States," and how few and unfashionable were the professed Abolitionists in Cincinnati, Mrs. Stowe's town. For years she had lived in Ohio, on the confines of a Slave-State, with " materials " always accumulating upon her watchful mind. But in Church and State, those who held her opinions were dangerous, and the Abolitionists of the North were the only per- sons to be heard of. So, when Dr. Bailey, "a wise, temperate and just man, a model of courtesy in speech and writing," set up an anti-slavery paper in Cincinnati for the purpose of a free and fair discussion, a mob led by slaveholders attacked his office and destroyed his press, and threw his types into the river. Coloured people were threatened everywhere, and Pro- fessor Stowe's house was more than once a refuge for terrified fugitives. The leaders of society simply begged Dr. Bailey to go, till he removed to Washington. When Mr. Vanzandt, a Kentucky farmer, set his slaves free and protected fugitives, he was seized and imprisoned, and it required such courage in the young lawyer who defended him, that one of the Judges remarked : "There goes a young man who has ruined himself to-day." The case went against Vanzandt, in spite of the lawyer, who afterwards, however, disappointed the prophecy on his own account by becoming famous as Chief Justice Chase.

Nobody who was of understanding at the time, however young, can forget the sensation caused by Uncle Tom's Cabin in the general world. Everybody read and cried over it,—man and woman, child and grown-up servant and master. It became the property of the stage at once, like all works of the kind ; and its curiously dramatic qualities became clearly apparent. It was a melodrama ready-made; and under the title, we think, of Slave-Life, through the ever-ready in- genuity of Mr. Tom Taylor, was popularised at the Adelphi, then, as now, the home of plays of the kind, by no less a col- lection of artists than Mr. Alfred Wigan and Mr. Emery, Miss Woolgar, Mrs. Keeley, and Madame Celeste ; while an odd stage celebrity known as A. Smith figured as Uncle Tom, —something of a lay-figure in the drama. It is to be feared, however, that, after all, the conscience of the land can have been but superficially stirred, as it did not prevent the unfor- tunate sympathy of the vast majority of English middle-class opinion, when the war broke out, with the slave-holding power. The conductors of this journal are not likely to forget how difficult it was even to obtain a hearing for the Northern side, and how vain was all the insight and eloquence of a John Bright to obtain a hearing among the "upper classes" so dear to the heart of many a St. Clair. For were not the South the "upper classes," or supposed to be so, even though Mr. Gladstone, on this occasion only, was so strongly on their side? That the working classes as a body held steadily to the Northern cause, was a great feature in their story ; nor should it be forgotten, on the other hand, how ingeniously the main feature of the great contest was disguised. Avowedly a war of tariffs, it was, as far as slavery was concerned, on the question of extension only, till the issue of Lincoln's pro- clamation of Emancipation as an inevitable step in the con- test. But that that step was to come, because there, and there only, lay the great dividing-line, should have been patent at least to those who had so pored over and delighted in the sorrows of Uncle Tom. Even here, however, the intrusive " but " of the other aide will come in, when we find how ingenious an advocate of the slaveholder's side that same dramatic faculty of Mrs. Stowe's will make of her at times. So amiable a man as St. Clair—so kindly and affectionate and beloved amongst his slaves, hating, as he says, the Thing, tolerated to make money for him, but not up to so energetic a step as freeing his slaves, and therefore preferring to keep them in order to help them to spend it—takes his own ground when he says that, "having traveled in England some" (we regret to find the publishers adopting the American brevity of bad spelling), he believes his brother's slaves better off than a large class of the population in England. If the slave- holder can whip his slave, the capitalist can starve him, and St. Clair doubts whether it be worse to see your children sold than to watch them starve to death. We need not, how- ever, argue over again the question that survives for debate in. America no more. Elsewhere it has a mighty fight before it, of which many living may yet see the end. As quicker and quicker grow the means of communication between the lessening ends of the tiny earth, and more constant and eager the exodus of the well-to-do in search of health or ease to the dark-bright continents of the sun, it would be dangerous to prophesy that it will be otherwise.

We look now, like Macaulay, rather with a sense of pain than anything else over the list of true cases with which the author fortified her story. But the interest of the romance and of the characters, as we take up the famous book again, seems to us as living as ever. In the devoted love and struggles of George and Eliza, and in the thrilling episode of Cassey and Emmeline, we find our sympathies as much en- listed as before, while Topsy and Miss Feely are immemorially delightful. The number of familiar passages and sayings, of old associations and thoughts, which come before us in the reading, are in themselves enough to prove bow great and complete a classic Uncle Tom's Cabin became. How it made its way into Italian, Macaulay told Mrs. Stowe himself. The monks translated it into Italian. Somi Klean, a lady of high rank at the Court of Siam, performed for it the same office in Siamese, under the tuition of her English governess, and, as we are rather touchingly told, signed herself "Harriet Beecher Stowe" ever after, in admiration of the lovely American lady who taught her to respect her fellow-creatures even as Buddha had instructed Kings, and led her voluntarily to liberate all her own slaves, a hundred and thirty in number. All Christianity welcomed a book which was read by officials -a.t the Vatican as well as the commonalty in Rome. In France, it was a curious effect of its success among the colporteurs to create a new demand and sale for the Bible ; while the translator of M. Charpentier's edition was led to an intimate knowledge of the sacred writings by the researches necessary for a correct rendering. Last, but not least, no less a man and no less keen a doubter than Heine himself found consolation in the Bible in his later years, and in taking delight in this rather than in favourite "citations from Homer," compared himself to Uncle Tom in proof of his new familiarity with the Book, while at the same time characteristically laying his finger upon a singular point, after his own methods of reflection. "Poor Tom," he says, "seems to have seen deeper things in the holy book

than I perhaps because more floggings occur in them,—that is to say, those ceaseless blows of the whip which have [esthetically disgusted rue in reading the Gospels and Acts."

It is perhaps not to be wondered at that Mrs. Stowe never succeeded in following up the success of Uncle Tom. She was essentially a one-book author, for so grave a purpose as that can scarcely speak but once. Her second book, Dred, was, as far as we can remember, a partial failure ; and certainly we cannot recall a scene or a character in it. In after-years she unfortunately became mixed up in an unpleasant controversy about the vexed relations of Lord and Lady Byron, which was to be pretty well her last connection with the literary world over here. But Uncle Tam's Cabin seems perennial; and still we feel the old thrill of sorrow for the brave, true black life which goes so sadly down but for its sustaining faith, and poor old Aunt Chloe's quiet moan : " dist as I knew it would be—sold and murdered on dem ar old planta- tions ! " It is a charming face which looks at us from the frontispiece of the two volumes—the younger and the older Mrs. Stowe's—and it was a charming mind which went with it into the writing of what we venture to think one of the great books of the world, and think more than ever to be the greatest of American growth.