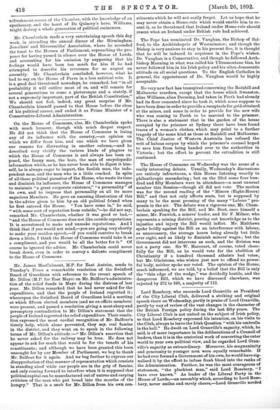 On the House of Commons, also, Mr. Chamberlain spoke with

much humour, though with much deeper respect. He did not think that the House of Commons is losing any of its influence with the country,—an opinion on which we differ from him, and one which we have given our reasons for distrusting in another column,—and he described very vividly the various kinds of plagues to which the House of Commons is and always has been ex- posed, the funny man, the bore, the man of encycloptedic information which, as he has never been able to digest it him- self, he is always eager to impart, the foolish man, the inde- pendent man, and the man who is a little cracked. In spite of all these political parasites of the House, who waste its time and diminish its influence, the House of Commons manages to maintain "a great corporate existence," "a personality" of its own, and to impress that personality on all its more sagacious Members. He gave an amusing illustration of this in the advice given to him by an old political friend when he first entered the House. "Ton have come in," he said, "with some sort of reputation from outside,"—he did not say, remarked Mr. Chamberlain, whether it was good or bad,— " and the House of Commons does not like outside reputations. It is accustomed to make and unmake reputations. And I think that if you would not mind,—you are going very shortly to make your maiden speech,—if you could contrive to break down a little, I think the House of Commons would take it as a compliment, and you would be all the better for it." Of course he ignored the advice. Mr. Chamberlain could never break down, even in order to convey a delicate compliment to the House of Commons.