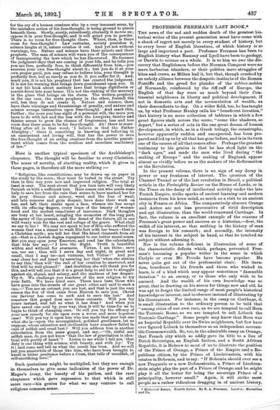 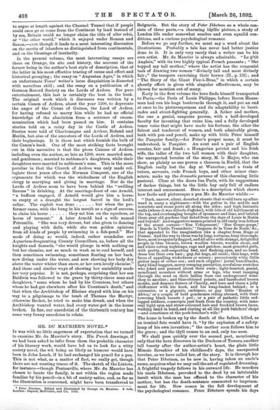 PROFESSOR FREEMAN'S LAST BOOK.* THE news of the sad and

sudden death of the greatest his- torical writer of the present generation must have come with a shook of regret not merely to every student of history, but to every lover of English literature, of which history is so large and important a part. Professor Freeman has been to English history what Ramsay and Lyell have been to geology, or Darwin to science as a whole. It is to him we owe the dis- covery that Englishmen before the Norman Conquest were no mere barbarian islanders, or their politics mere struggles of kites and crows, as Milton had it, but that, though crashed by an unholy alliance between the despotic instincts of the Roman Pontiffs and the greed for plunder of the robber-nobles of Normandy, reinforced by the riff-raff of Europe, the English of that day were as much beyond their Con- tinental neighbours in liberty and political development, if not in domestic arts and the accumulation of wealth, as their descendants to-day. On a wider field, too, he has taught us, by what Professor Huxley calls his "beneficent iteration," that history is no mere collection of tableaux in which a few great figures stalk across the scene, "come like shadows, so depart," but a series of acts in the one great drama of human development, in which, as in a Greek trilogy, the catastrophe, however apparently sudden and unexpected, has been pre- pared and led up to by all that has gone before, and is in its turn one of the causes of all that comes after. Perhaps the greatest testimony to his genius is that he has shed light on the "dark ages," and made the men who lived during "the making of Europe" and the making of England, appear almost as vividly before us as the makers of the Reformation or the Revolution.

In the present volume, there is no sign of any decay in power or any freshness of interest. The question of the Channel Tunnel or of the last revolution in Brazil, a political article in the Fortnightly Review on the House of Lords, or in the Times on the decay of intellectual activity under the late French Empire, strike sparks of ancient learning and modern instances from his keen mind, as much as a visit to an ancient city in France or Africa. The comparatively obscure Orange and Autun are not less provocative of vivid description and apt illustration, than the world-renowned Carthage. In fact, the volume is an excellent example of the reasons of Freeman's great power and success as a historian,—first, the width of his interest, so that nothing in the history of man was foreign to his research; and secondly, the intensity• of his interest in the subject in hand, so that he touched no subject without adorning it.

Nor is the volume deficient in illustration of some of the characteristic defects which, perhaps, prevented Free- man's becoming a popular writer in the sense in which Carlyle or even Mr. Froude have become popular. He never quite got out of the professorial chair. His itera- tion, beneficent to his friends and those who wished to learn, is of a kind which may appear sometimes "damnable iteration" to an enemy, or to those who only wish to be amused. And the wealth of his own knowledge was so great, that in drawing on his stores for things new and old, he was apt to forget the limited range of most people's historical knowledge or interest, and to obscure instead of illustrating by his illustrations. For instance, in the essay on Carthage, it is small illustration to the ordinary person to be told that "among cities of our own race, as we are tempted to call Bern the Teutonic Rome, so we are tempted to call Liibeck the Teutonic Carthage." Some people may know that Bern was an Imperial Republic over its Swiss neighbours, but few have ever figured Liibeck to themselves as an independent mercan- tile Commonwealth. So, too, in the admirable essay on Orange, that French city which so oddly gave its title to a line of Dutch Sovereigns, an English faction, and a South African Republic, it is Hebrew to most of us to illustrate the position of the Prince of Orange, a Prince of the Empire and a Re- publican citizen, by the Prince of Liechtenstein, with his estates in Bohemia, and to say: "If Bohemia should ever see a new Pragaerie or a new Defenestratio, a Prince of Liechten- stein might play the part of a Prince of Orange, and he might play it all the better for being the sovereign Prince of a principality, however small." Again, it will strike most people as a rather ridiculous dragging in of ancient history,

• Historical Essays. Fourth Berks. By E. A. Freeman. Louden: Macmillan and Co. to argue at length against the Channel Tunnel that if people could once go or come from the Continent by land instead of by sea, Britain could no longer claim the title of alter orbis, or "the other world," which it enjoyed under Roman and Saxon,—even though it leads to a most interesting discussion on the merits of islanders as distinguished from continentals, and on the blessings of insularity.

In the present volume, the most interesting essays are those on Orange, its site and history, the account of the former being in the author's best style of description, that of the latter in his most effective tracing of cause and effect and historical grouping ; the essay on "Augustan Ages," in which an unfortunate Times' writer's loose disquisition is dissected with merciless skill ; and the essay on a publication of a German Record Society on the Lords of Ardres. For pure entertainment, this last is certainly the best in the book. The original work which it discusses was written by a certain Canon of Ardres, about the year 1200, to deprecate the anger of the Count of Guinea, the Lord of Ardres, for having refused to marry him while he had no official knowledge of the absolution from a sentence of excom- munication which had been passed on him. It contains stories told on a rainy day in the Castle of Ardres. Stories were told of Charlemagne and Arthur, Roland and Merlin, but also of the ancestors of the Lords of Ardres, and their beginnings. It is these last which furnish the bulk of the Canon's book. One of the most striking facts brought out in this narrative is that the pious Canons of Ardres, including even the author, so late as 1200, were married men, and gentlemen; married to noblemen's daughters, while their daughters were married to noblemen's Bons. This is the more peculiar in that the Church of Ardres was only made col- legiate three years after the Norman Conquest, one of the arguments for which was the wickedness of the English clergy in marrying and giving in marriage. Nor do the Lords of Ardres seem to have been behind the "swilling Saxons" in drinking. At the marriage-feast of one Arnold, "a buffoon engaged, if Arnold would give him a horse, to empty at a draught the largest barrel in the lord's

cellar. The exploit was done but when the per- former came, with the bung in his month as a sign of success,

to claim his horse they sat him on the equuleus, or horse of torment." A later Arnold had a wife named Petronilla. "She was very devout, but also given to dancing and playing with dolls, while she won golden opinions from all kinds of people by swimming in a fish-pond." Her mode of doing so would, indeed, rather scandalise our Aquarium-frequenting County Councillors, as, before all the knights and damsels, "she would plunge in with nothing on but her chemise, not so much to wash as to cool herself, and then sometimes swimming, sometimes floating on her back, now diving under the water, and now showing her body dry above the water whiter than snow, or her own lovely chemise." And these and similar ways of showing her amiability made her very popular. It is not, perhaps, surprising that her son Baldwin was followed to the grave by thirty-three sons and daughters, "some whom he had by his Countess, but others whom he had got elsewhere after his Countess's death," and that when the Archbishop of Rheims stayed with him on his way to a pilgrimage to the tomb of Thomas the Martyr, otherwise Becket, he tried to make him drunk, and when the Archbishop wanted water, had every water-pot in the house

broken. In fine, our anecdotist of the thirteenth century has

some very funny anecdotes to relate.