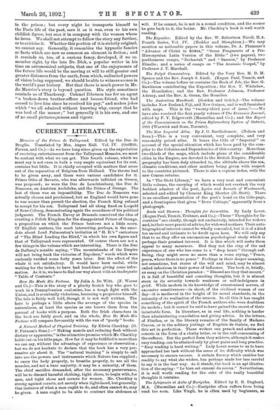 The New Imperial Atlas. By j. G. Bartholomew. (Nelson and

Sons.)—This is a very convenient, very complete, and very reasonably priced atlas. It bears the title of " Imperial " on account of the special attention which has been paid by the com- piler to the Colonies and Dependencies of this country. More than two-thirds of the maps, which include plans of the considerable cities in the Empire, are devoted to the British Empire. Physical geography has been duly attended to, the altitude above the sea, climatic conditions, and other matters being given with respect to the countries pictured. There is also a copious index, with the new Census returns.