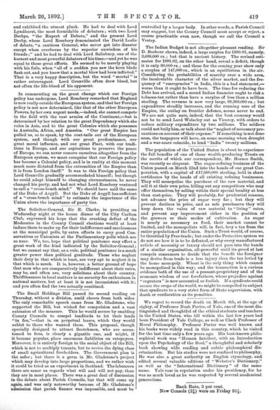 The Indian Budget is not altogether pleasant reading. Sir D.

Barbour shows, indeed, a large surplus for 1890-91, namely, 3,688,000 rx.; but that is ancient history. The revised esti- mates for 1891-92, on the other hand, reveal a deficit, though it is only 80,000 rx.; and those for the coming year show only a surplus of 147,000 rx., which is an equilibrium in the air. Considering the probabilities of scarcity over a wide area, the incalculable character of the silver market, and the fre- quency of " emergencies " in India, this is a bad statement,— worse than it ought to have been. The time for reducing the Debt has arrived, and a sound Indian financier ought to risk a tobacco-tax rather than have a surplus of less than a million sterling. The revenue is now very large, 88,368,000 rx.; but expenditure steadily increases, and the running sore of the Empire, the outlay on frontier defence, seems never to end. We are not quite sure, indeed, that the best economy would not be to send Lord Wolseley out as Viceroy, with orders to reduce military expenditure by two millions. The soldiers could not bully him, or talk about the "neglect of necessary pre- cautions on account of their expense." If something is not done soon, the taxpayers will have, on some morning when drought and a war-scare coincide, to lend "India" twenty millions.