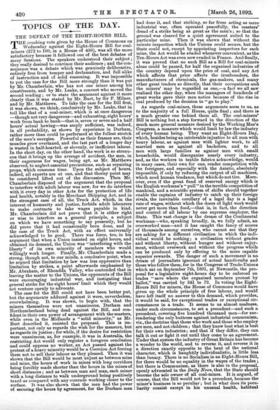 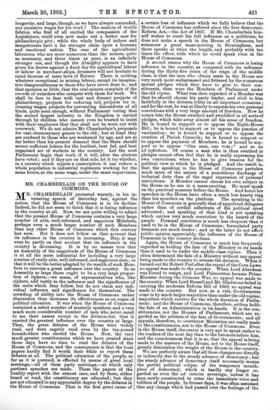 THE DEFEAT OF THE EIGHT-HOURS BILL. THE crushing vote given by the House of Commons on Wednesday against the Eight-Hours Bill for coal- miners (272 to 160, in a House of 436), was all the more satisfactory because it followed one of the best debates of many Sessions. The speakers understood their subject ; they really desired to convince their audience ; and the con- sequence was a debate which was genuinely deliberative, entirely free from temper and declamation, and full alike of instruction and of solid reasoning. It was impossible to put the case for the Bill more strongly than it was put by Mr. Chamberlain, who has not one miner among his constituents, and by Mr. Leake, a convert who moved the second reading ; or to state the argument against it more clearly than it was stated by Mr. Burt, by Sir F. Milner, and by Mr. Matthews. To take the case for the Bill first, it was shown, we think, conclusively by Mr. Leake, that in toil like that of a coal-miner, which is at once dangerous —though not very dangerous—and exhausting, eight hours' work from bank to bank—that is, seven or seven and a half hours' actual hewing—was amply sufficient, was indeed, in all probability, as shown by experience in Durham, rather more than could be performed at the fullest stretch of the men's energies. Powerful as their frames are, their muscles grow overtaxed, and the last part of a longer day is wasted in half-hearted, or slovenly, or inefficient labour. In the short day, on the other hand, the work is so strenu- ous that it brings up the average of accident, the men, in their eagerness for wages, being apt, as Mr. Matthews observed, to neglect essential precautions, such as repairing props, which consume time. Upon the subject of hours, indeed, all experts are at one, and that thorny point may be considered lifted out of the discussion. Then Mr. Chamberlain disposed of the argument that the proposal to interfere with adult labour was new, for we do interfere with it every day in other Acts for the protection of life and health, notably in the Merchant Shipping Act, and in the strongest case of all, the Truck Act, which, in the interest of humanity and justice, forbids adult labourers to make contracts to take wages payable in kind. Mr. Chamberlain did not prove that it is either right or wise to interfere as a general principle, a subject on which we have something to say presently, but he did prove that it had occasionally been done, and in the case of the Truck Act, with an effect universally acknowledged to be good. There was force, too, in his argument that when a Union insisted on eight hours, and obtained its demand, the Union was "interfering with the liberty" of its own minority of members who would willingly work longer. Finally, Mr. Chamberlain made a strong, though not, to our minds, a conclusive point, when he argued that limitation by law was less oppressive than limitation by strikes, a point afterwards emphasised by Mr. Abraham, of Rhondda Valley, who contended that in leaving the matter to the -Unions, the opponents of the Bill were encouraging industrial war, and instigating that general strike for the eight hours' limit which they would not venture openly to advocate. The case for the Bill could not have been better put, but the arguments adduced against it were, nevertheless, overwhelming. It was shown, to begin with, that the miners themselves were not unanimous, Durham and Northumberland being dead against the Bill, and con- fident in their own power of arrangement with the masters, while even in the Midlands a "solid minority," as Mr. Burt described it, resisted the proposal. This is im- portant, not only as regards the wish for the measure, but as regards its justice ; for while, if the desire for restriction were unanimous, as, for example, it was in Australia, the restricting Act would only register a foregone conclusion and could oppress no worker, an Act passed against the protest of a heavy minority would be a Coercion Act forcing them not to sell their labour as they pleased. Then it was shown that the Bill would be most unjust as between mine and mine, the hours of work in mines with long corridors being forcibly made shorter than the hours in the mines of short distances ; and as between man and man, each miner with a long distance to walk underground being positively taxed as compared with any comrade working closer to the surface. It was also shown that the men had the power of securing the hours by agreement, for the Durham men had done it, and that striking, so far from acting as mere industrial war, often operated peacefully, the masters' dread of a strike being as great as the men's ; so that the ground was cleared for a quiet agreement suited to the- particular mine. Then it was shown that without the- minute inspection which the Unions could secure, but the State could not, except by appointing inspectors for each mine, the Act would be evaded whenever convenient, as the Ten-Hours Act was even now evaded in France. And finally, it was proved that no such Bill as a Bill for coal-miners alone could be passed, for half the organised industries of the country depend upon the price of coal, and any Act which affects that price affects the ironfounders, the manufacturers of chemicals, the gas-makers, and many other great traders so directly, that their occupations and the miners' may be regarded as one,—a fact we all saw- realised the other day, when the managers of hundreds of great works gave their men notice because of the rise in coal produced by the decision to "go to play."

As regards coal-mines, these arguments seem to us, as- to the majority of a full House, quite final ; and there is a much greater one behind them all. The coal-miners' Bill is nothing but a step forward in the direction of the much more general measure desired by the Working Men's Congress, a measure which would limit by law the industry of every human being. They want an Eight-Hours Day, which, besides being an intolerable injustice to all men with heavy labour, as against men with lighter work, to all married men as against all bachelors, and to all men with large families as against men with small households, would disorganise nearly every industry, and, as the workers in textile fabrics acknowledge, would in many cases, their own for one, render competition with the foreigner, and especially with the Asiatic, absolutely impossible, if only by reducing the output of all machines, which need human tendance, but which do not tire. More- over, even if the great fund of reserved energy which is the English workman's " pull " in the terrible competition of mankind, and a scientific system of shifts should together enable the captains of industry to catch up their foreign rivals, the inevitable corollary of a legal day is a legal rate of wages, without which the doers of light work would never get more than food,—that is, in fact, the direction and control of all labour by one supreme employer, the State. This vast change is the dream of the Continental workman—who, speaking broadly, is, we fully admit, an overworked man—and it has caught the fancy of scores of thousands among ourselves, who cannot see that they are asking for a different civilisation in which the indi- vidual would be nothing ; a civilisation without grades and without liberty, without hunger and without enjoy- ment, without overwork and without the progress which can be produced only by offering to the more capable superior rewards. The danger of such a movement is no, dream of journalists ignorant of actual handicrafts and those who follow them, for in the Congress of Trade-Unions which sat on September 7th, 1891, at Newcastle, the pro- posal for a legislative eight-hours day to be enforced OD trades "save where the organised members protest by ballot," was carried by 341 to 73. In voting the Eight- Hours Bill for miners, the House of Commons would have given up the whole principle of free labour, and would have left itself no answer to this demand, which provides, it would be said, for exceptional trades or exceptional cir- cumstances in a trade. It seems to us almost madness, under such circumstances, to set a precedent—and such a. precedent, covering five hundred thousand men—for sur- rendering the only buttress against industrial communism, viz.,the doctrine that those who work and those who employ are men, and not children ; that they know best what is best for their own industries ; and that if they differ, they can. talk it out or fight it out until they come to an agreement. Under that system the industry of Great Britain has become a wonder to the world, and to reverse it, and reverse it in a direction exactly opposite to the bent of the national character, which is haughtily individualistic, is little less than lunacy. There is no Socialism in an Eight-Hours Bill„ for there would be no equality in the wages of the trades ; but there is Communism, as there is also in the proposal, openly advocated in the Daily News, that the State should become the sole owner of all coal-mines. It is argued, of course, that the Bill would not be a precedent, because the miner's business is so peculiar ; but in what does its pecu- liarity consist except in his unusual health, habitual longevity, and large, though, as we have always contended, not excessive wages for his work ? The makers of textile fabrics, who first of all excited the compassion of the Legislature, could even now make out a better case for philanthropic pity ; while the whole body of tailors and sempstresses have a far stronger claim upon a humane and emotional nation. The case of the agricultural labourers, who are more numerous than the miners, quite as necessary, and three times as poor, is an infinitely stronger one, and though the Almighty appears to have given his decree against a fixed day for agricultural labour or labour in merchant-ships, dreamers will not hesitate to enact because of mere laws of Nature. There is nothing whatever exceptional in mining labour, except its imagina- tive disagreeableness to those who have never done it ; and that operates so little, that the coal-miners complain of the crowds of outsiders who compete with them for work. We shall be face to face with vast and dreamy projects of philanthropy, projects for reducing toil, projects for in- creasing wages, projects for preventing discomforts of all kinds, quite soon enough, without Parliament voting that the second largest industry in the Kingdom is carried through by children who cannot even be trusted to insist with their employers that they shall not be worn out with overwork. We do not admire Mr. Chamberlain's proposals for vast eleemosynary grants to the old ; but at least they are confined to those who are weakened by age, and are so far better than his present demand that the State should secure sufficient leisure for the burliest, best fed, and best organised set of workers in the country. Let the next Parliament begin that work, if it will, after the electors have voted ; and if they are on that side, let it try whether, in a country which rejects a conscription, it can reduce a whole population to industrial regiments working for the same hours, at the same wage, under the same supervision.