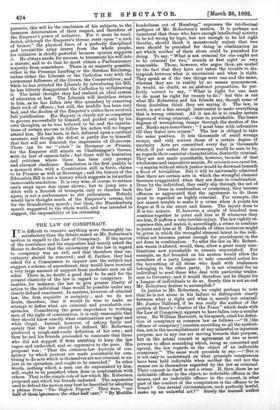 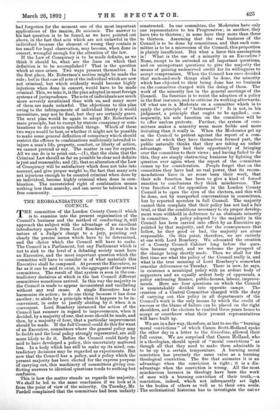 THE LAW OF CONSPIRACY.

IT is difficult to conceive anything more thoroughly un- satisfactory than the debate raised on Mr. Robertson's motion in regard to the Law of Conspiracy. If the mover of the resolution and his supporters had merely asked the House to declare that the uncertainty of the law in regard to conspiracy was an evil, and that therefore that un- certainty should be removed ; and if, further, they had asked for a Commission to inquire into the subject and suggest a scheme of amendment, they would have received a very large amount of support from moderate men on all sides. There is, no doubt, a good deal to be said for the present elasticity of the law in regard to conspiracy. It enables, for instance, the law to give greater liberty of action to the individual than would be possible under any clearly defined enactment. In matters, however, of criminal law, the first requisite is certainty ; and we do not doubt, therefore, that it would be wise to make an attempt to define what are criminal and punishable con- spiracies. Considering the great importance to working men of the right of combination, it is only reasonable that they should know exactly what combinations are legal and what illegal. Instead, however, of asking fairly and openly that the law should be defined, Mr. Robertson produced a rough-and-ready definition of his own ; and then he and his friends proceeded to insinuate that those who did not support it were assisting to keep the law vague and undecided, and so oppressive to the poor. His proposal was : "That the common-law doctrine of con- spiracy by which persons are made punishable for com- bining to do acts which in themselves are not criminal, is un- just in its operation, and ought to be amended." In other words, nothing which a man can do unpunished by him- self, ought to be punished when done in combination with others. That is the simple rule of law which Mr. Robertson proposed and which his friends endorsed. The arguments used to defend the motion may best be described by adopting a phrase from "The Biglow Papers." They were, "one half of them ignorance, the other half cant." "By Muddle- headedness out of Humbug," expresses the intellectual f pedigree of Mr. Robertson's motion. It is perhaps not - unnatural that those who have enough intellectual activity to be led wrong by logic, but not enough to be led right thereby, should think it monstrously unjust that two , men should be punished for doing in combination an act which neither of them alone could be punished for doing. To say, "What is not criminal for one ought not to be criminal for two," sounds at first sight so very reasonable. Those, however, who argue thus, are misled by the fact that they have not taken the trouble to dis- tinguish between what is uncriminal and what is right. They speak as if the two things were one and the same, whereas they are in reality by no means synonymous. It would, no doubt, as an abstract proposition, be per- fectly correct to say, " What is right for one man to do must be right for twenty to do ;" but this is not what Mr. Robertson and his friends say, though some of them doubtless think they are saying it. The law, in truth, is not a fine enough instrument to make everything that is wrong criminal. All it can do is to render certain degrees of wrong criminal,—that is, punishable. The lesser degrees of wrongdoing escape through the meshes of the net. Burke says somewhere : "I must bear with infirmities till they fester into crimes." The law is obliged to take the same position. It lets thousands of small wrongs escape, and only notices those of a certain degree of enormity. Acts are committed every day in thousands which, if put under the microscope, would be seen to be, as regards their essential characteristics, distinctly criminal. They are not made punishable, however, because of that wholesome and imperative maxim, De minimis non eurat lez, —a maxim without which justice would be drowned beneath a flood of trivialities. But it will be universally admitted that there are certain acts in which the wrongful element becomes exaggerated when they are done in combination. Done by the individual, they easily slip through the net of the law. Done in combination or conspiracy, they become offences so aggravated that the agreement to do them must be regarded as highly criminal. For example, the law cannot trouble to make it a crime when A points his finger at B in the street and hisses. The injury done to B is too minute. If, however, a couple of hundred men combine together to point and hiss at B whenever they see him, B suffers a very terrible injury. The law rightly re- cognises this, and makes it, accordingly, a crime to combine to point and hiss at B. Hundreds of other instances might be given in which the wrongful element latent in the indi- vidual act becomes patent enough for punishment in the act done in combination. To alter the law as Mr. Robert- son wants it altered, would, then, allow a great many com- binations now punishable to remain unpunished. For example, an Act founded on his motion would allow the members of a party League to take concerted action for the boycotting of all those who dealt with tradesmen belonging to the other party. It is not criminal for an individual to send those who deal with particular trades- men to Coventry, and it would therefore not be illegal for a League of individuals to do so. Surely this is not an end Mr. Robertson desires to accomplish ?

In justice to Mr. Robertson, we ought perhaps to note that he is not alone in his failure to distinguish clearly between what is right and what is merely not criminal. Mr. Justice Talfourd, if he was really the author of the portion of Burn's "Justice of the Peace" which deals with the Law of Conspiracy, appears to have fallen into a similar error. Sir William Harcourt, in his speech, cited his defini- tion of conspiracy at common law as follows :—" It [the offence of conspiracy] consists, according to all the authori- ties, not in the accomplishment of any unlawful or injurious purpose, nor in any one act moving towards that purpose, but in the actual concert or agreement of two or more persons to effect something which, being so concerted and agreed, the law regards as the object of an indictable conspiracy." The same work proceeds to say :—" But it is not easy to understand on what principle conspiracies have been held indictable when neither the end nor the means are in themselves regarded by the law as criminal. Their concert in itself is not a crime. If, then, there be no indictable offence in the object, no indictable offence in the means, and no indictable offence in the concert, in what part of the conduct of the conspirators is the offence to be found ? Can several circumstances, each perfectly lawful, make up an unlawful act ?" Surely the learned author had forgotten for the moment one of the most important applications of the maxim, De minim is. The answer to his last question is to be found, as we have pointed out above, in the fact that acts which are not unlawful in the individual because the element of wrong they contain is too small for legal observation, may become, when done in concert, wrongful enough for the attention of the law. If the Law of Conspiracy is to be made definite, as we think it should be, what are the lines on which that definition is to be accomplished ? That is the question which at once arises. Two ways present themselves. In the first place, Mr. Robertson's motion might be made the rule ; but in that case all acts of the individual which are now not criminal, but which evidently would become highly injurious when done in concert, would have to be made criminal. This, we take it, is the plan adopted in most foreign systems of jurisprudence. The acts of individuals are much more severely scrutinised than with us, and many more of them are made unlawful. The objections to this plan owing to the infringements of individual liberty it would necessitate, may not be final, but they are certainly grave. The next plan would be again to adopt Mr. Robertson's main principle, but to except by statute conspiracy or com- binations to do certain specified things. Which of these two ways would be best, or whether it might not be possible to make some general definition of conspiracy which should restrict the offence to combinations maliciously intended to injure a man's life, property, comfort, or liberty of action, we cannot pretend to say. The matter is one for experts. All we can do is to point out,—(1), that the claim that the Criminal Law should as far as possible be clear and definite is just and reasonable; and (2), that no alteration of the Law of Conspiracy will be satisfactory which does not take into account, and give proper weight to, the fact that many acts not injurious enough to be counted criminal when done by an individual, become highly criminal when done in com- bination. The unrestricted right of combination means nothing less than anarchy, and can never be tolerated in a free community.