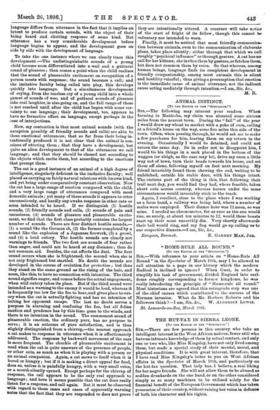 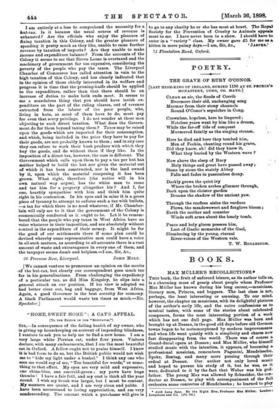 THE HUT-TAX IN SIERRA LEONE.

[To THE EDITOR OF THE " SPECTATOR "1 SIR,—There are few persons in this country who take an intelligent interest in the West African natives, fewer still who have an intimate knowledge of them by actual contact, and only one or two who, like Miss Kingsley, have not only lived among them, but made a special study of their mental, moral, and physical conditions. It is with great interest, therefore, that I have read Miss Kingsley's letter to you on West African affairs in the Spectator of March 19th, and particularly on the but-tax question. That lady has, I believe, a real liking for her negro friends. She will not allow them to be abused as sodden drunkards on the one band, or on the other considered simply as so many machines to be utilised solely for the financial benefit of the European Government which has taken possession of their country, without raising her voice in defence of both his character and his rights. I am entirely at a loss to comprehend the necessity for a lint-tax. Is it because the usual source of revenue is exhausted ? Are the officials who enjoy the pleasure of faxing taxation in this Colony, and the greater pleasure of spending it pretty much as they like, unable to raise further revenue by taxation of imports ? Are they unable to make

income and expenditure balance P From the accounts of the Colony it seems to me that Sierra Leone is overtaxed and the machinery of government far too expensive, considering the poverty of the people who pay the taxes. The Liverpool Chamber of Commerce has called attention in vain to the high taxation of this Colony, and has clearly indicated that in the opinion of those chiefly interested in its welfare and progress it is time that the pruning-knife should be applied to the expenditure, rather than that there should be an increase of duties to make both ends meet. It seems to me a scandalous thing that you should have lavish ex- penditure on the part of the ruling classes, out of revenue extracted from the labour of the poor people, who, living in huts, as most of them have to do, must pay for even that sorry privilege. I do not wonder at these men objecting to such direct taxation. What does the Govern- ment do for them beyond taxing them ? Taxes may be raised upon the goods which are imported for their consumption, and which, being included in the price they have to pay for their goods, are not probably known to them ; and in any case they can refuse to work their bush produce with which they buy the goods, and do without them if they like. In the imposition of a direct tax, however, the case is different. The Government which calls upon them to pay a tax per hut has neither helped to build the hut nor given the material out of which it has been constructed, nor is the land owned by it, upon which the material composing it has been grown. What right, therefore (the native will in his own natural way argue), has the white man to come and tax him for a property altogether his P And 1, for one, heartily sympathise with him and think him quite right in his contention. In his eyes and in mine it is a gross piece of tyranny to attempt to enforce such a tax with bullets, —a tax for which there is no need whatever, if Mr. Chamber- lain will only see to it that the government of the Colony is economically conducted as it ought to be. Let it be remem- bered that the people who pay taxes in West Africa have no voice whatever in their imposition, and are absolutely without control in the expenditure of their money. It might be for the good of our settlements there if some plan could be devised whereby some representative men could have a voice in all such matters, as according to all accounts there is a vast amount of waste and extravagance in every one of them, and the taxpayer seems dumb and helpless..—.I am, Sir, Sze., [We cannot venture to pronounce an opinion on the merits -of the hut-tax, but clearly our correspondent goes much too far in his generalisations. From challenging the expediency of a particular tax, as did Miss Kingsley, he slips into a general attack on our position. If his view is adopted we had better clear out, bag and baggage, from West Africa. Again, a good Governor is the best security for economy. A black Parliament would waste ten times as much.—En. Spedator.]