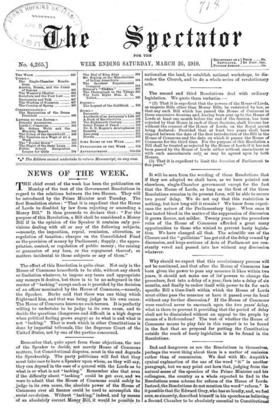 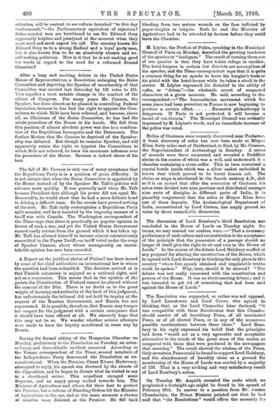 Page 1, 26 March 1910 — Bad and dangerous as are the Resolutions in themselves, perhaps
Close

Bad and dangerous as are the Resolutions in themselves, perhaps

the worst thing about them is a matter of omission rather than of commission. We deal with Mr. Asquith's cynical explanation of the use of the word "it" in another paragraph, but we may point out here that, judging from the natural sense of the speeches of the Prime Minister and his colleagues, the country as a whole expected to find in the Resolutions some scheme for reform of the House of Lords. Instead, the Resolutions do not mention the word" reform." Is it possible that Sir Edward Grey, who has so loudly, and, we feel sure, so sincerely, described himself in his speeches as believing a Second Chamber to be absolutely essential to Constitutional

salvation, will be content to see reform banished "to this day t welvemonth,"—the Parliamentary equivalent of rejection ? Sober-minded men are bewildered to see Sir Edward Grey apparently helpless and paialysed at the moment when they most need and most expect his aid. The country knows Sir Edward Grey to be a strong Radical and a loyal party man, Lot it also knows him to be an absolutely sincere and un- self-seeking politician. How is it that he is not making good his words in regard to the need for a reformed Second Chamber?