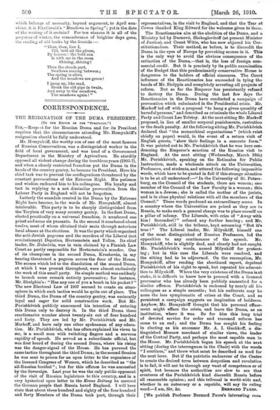 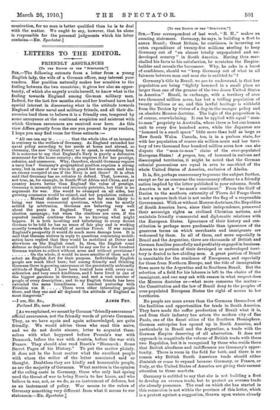 THE RESIGNATION OF THE DUMA PRESIDENT.

SIR,—Respect for the Russian Duma and for its President requires that the circumstances attending Mr. Homyakoff's resignation should be fully understood.

Mr. Homyalaiff, the worthy son of one of the most famous of Russian Conservatives, was a distinguished worker in the field of local government, and was head of a Government Department in the Ministry of Agriculture. He sturdily opposed all violent change during the troublous years (1905-7), and when a closely restricted franchise put the Duma in the hands of the country gentry, he became its President. Here his chief task was to prevent the conflagrations threatened by the constant provocations of the Extreme Right. His patience and wisdom endeared him to his colleagues. His loyalty and tact in replying to a not dissimilar provocation from the Labour Party in England will not be forgotten.

Latterly the scandals created in the Duma by the Extreme Right have become, in the words of Mr. Homyakoff, almost intolerable. This party is to be sharply distinguished from the Toryism of very many country gentry. In the first Duma, elected practically on a universal franchise, it numbered one priest and some six peasants. In the second it numbered about twelve, most of whom obtained their seats through notorious local abuses at the elections. It was the party which organised the anti-Jewish pogroms and the murders of the Liberal (not revolutionary) Deputies, Hertzenstein and Yollos. Its chief leader, Dr. DubrOvin, was in vain claimed by a Finnish Law Court as partly responsible for Hertzenstein's murder. One of its champions in the second Duma, Krushevin, in my hearing threatened a pogrom across the floor of the House. The scenes which led to the dissolution of the second Duma, at which 1 was present throughout, were almost exclusively the work of this small party. Its simple method was suddenly to launch some remark entirely provocative; for instance, Mr. Shulghin's : "Has any one of you a bomb in his pocket?" The new Electoral Law of 1907 seemed to create an atmo- sphere in which such tactics would be quite out of place. The third Duma, the Duma of the country gentry, was eminently loyal and eager for solid constructive work. But Mr. Purishkevich publicly announced his intention of entering this Duma only to destroy it. In the third Duma these reactionaries number about twenty-six out of four hundred and forty. They are led by Mr. Purishlevich and Mr. Markoff, and have only one other spokesman of any edue.a- tion. Mr. Purishkevich, who has often explained his views to me, is a small man with twitching fingers and a nervous rapidity of speech. He served as a subordinate official, but was first beard of during the second Duma, where his rising was the danger-signal of the House. He has pursued the same tactics throughout the third Duma; in the second Session he was sent to prison for an open letter to the organisers of the licensed Congress of Women, which he described as "the all-Russian brothel" ; but for this offence he was amnestied by the Sovereign. Last year he was the only public opponent of the visit of Russian legislators to this country, and in a very hysterical open letter to the Irreus Zeitung he assured the German people that Russia hated England. I will here state that about three hundred and eighty of the four hundred and forty Members of the Duma took part, through their

representatives, in the visit to England, and that the Tsar at Cowes thanked King Edward for the welcome given to them.

The Reactionaries aim at the abolition of the Duma, and a Ministry led by Durnovo, Shcheglovitolf (at present Minister of Justice), and Count Witte, who has now abjured his Con- stitutionalism. Their method, as before, is to discredit the Duma in the eyes of Europe by provoking scenes in it. This is the only way to avoid the obvious consequence of the extinction of the Duma,—that is, the loss of foreign com- mercial credit. But it is precisely by its public examination of the Budget that this predominantly conservative House is dangerous to the holders of official sinecures. The Court influence of the Reactionaries has succeeded in tying the hands of Mr. Stolypin and completely arresting all projects of reform. But so far the Emperor has persistently refused to destroy the Duma. During the last few days the Reactionaries in the Duma have conducted a campaign of provocation which culminated in the Presidential crisis. Mr. Ma.rkoff led off with a proposal "to hang a given quantity of harmful persons," and described as criminals the whole Liberal Party and Count Leo Tolstoy. At the next sitting Mr. Markeff proposed, in lieu of smaller corporal punishments, castration or the death penalty. At the following sitting Mr. Purishkevieh declared that "the monarchical organisations" (which exist chiefly on paper) would, in the event of a return visit of English guests, "show their feelings in a concrete form." It was pointed out to Mr. Purishkevich that he was here con- demning the Emperor's sanction of the Russian visit to England. At the next sitting (Wednesday, March 16th) Mr. Purishkevich, speaking on the Estimates for Public Instruction, made a wholesale attack on the Universities, Professors, and students, and Tittered the following impossible words, which have to be quoted in full if this strange situation is to be at all understood :—" In the University of St. Peters- burg, on the Council of the students, there are women; one member of the Council of the Law Faculty is a woman; this woman is a Jewess; she is called the mother of the jurists, and is in close physical relations with all the members of the Council." These words produced an extraordinary scene. In a country where the Universities are prized as they are in Russia, to make such a general charge was to place oneself on a pillar of infamy. The Liberals, with cries of "Away with him ! Scoundrel !" refused any further hearing ; and Mr. Purishkevich, still in the tribune, kept screaming "But it's true !" The Liberal leader, Mr. Milynk6ff, himself one of the most distinguished of Russian Professors, led the opposition to any continuance of the speech. Mr. Homyakeff, who is slightly deaf, and clearly had not caught Mr. Purishkevich's words, named Milyukeff for protest- ing; but in this case the Liberals were resolved, and the sitting had to be adjourned. On the resumption, Mr. HomyakOff, after reading the shorthand report, deprived Purishkevich of his right to speak, but repeated his admoni- tion to Milyukoff. Where the very existence of the Mims is at stake, it is difficult to know how to proceed with a licensed provocator who has already been publicly amnestied for a similar offence. Purishkevich is reckoned by nearly all his colleagues as a simple neurotic; but his outbursts may be none the less symptomatic of crises at the Court, and so persistent a campaign suggests an inspiration of boldness. Anyhow, Mr. Homyakoff thought that his personal efface- ment might efface the crisis, and leave the Duma, as an institution, where it was. So for him this long trial of devoted service for order and reasoned reform has come to an end ; and the Duma has caught his feeling in electing as his successor Mr. A. I. Guchkoff, a dis- tinguished Moscow merchant of similar views, the leader of the Central Party, and perhaps the most capable man in the House. Mr. Purishkevich began his speech at the next sitting (during the interregnum in the Chair) with the words "I continue," and threw what must be described as mud for the next hour. But if the patriotic endeavour of the Centre to create the desired term between despotism and revolution is to fail, it will not be through any want of competence or of spirit, but because the authorities are slow to see that creatures of the Purishkevich kind discredit Russia before all reasonable opinion ; and this tribunal is world-wide and, whether in an autocracy or a republic, will say its ruling [We publish Professor Bernard Pares's interesting corn. munication, for no man is better qualified than he is to deal with the matter. We ought to say, however, that he alone is responsible for the personal judgments which his letter contains.—En. Spectator.]