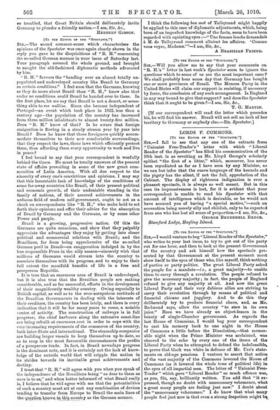 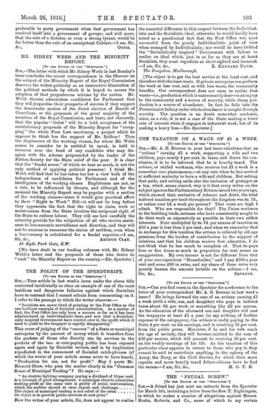 Sra,—I would venture to beg "Liberal Reader of the Spectator," who writes to your last issue, to try to get out of the party rut for one hour, and then to look at the present Government of the country and ask himself how the spectacle pre- sented by that Government at the present moment must show itself to the eyes of those who, like myself, think nothing of parties or party politics. The great Liberal Party asked the people for a mandate--i.e., a great majority—to enable them to carry through a revolution. The people refused to give the necessary majority ; in fact, the people of England refused to give any majority at all. And now the great Liberal Party and their very dubious allies are striving to carry their revolution through by means of political and financial chicane and jugglery. And to do this they deliberately try to produce financial chaos, and, as Mr. Redmond says, allow the country "to stew in its own juice." Here we have already an object-lesson in the beauty of single-Chamber government. As regards the last House of Comm-ons, I would beg your correspondent to cast his memory back to one night in the House of Commons a little before the Dissolution,—that memor- able night when the Prime Minister was acclaimed, was cheered to the echo by every one of the items of the Liberal Party when he attempted to defend the indefensible, to prove that black was white in defence of Mr. Ure's state- ments on old-age pensions. I venture to assert that action of the vast majority of the Commons lowered the House of Commons (as it lowered the whole tone of political life) in the eyes of all impartial men. The letter of "Unionist Free. Trader " which gave "Liberal Reader" so much offence was, as you, Sir, say, brilliantly written. You add that "it ex.. pressed, though no doubt with unnecessary vehemence, what a great many people are feeling just now." I doubt about the "unnecessary vehemence." / do know that what many people feel just now is that even a strong despotism might bk. preferable to party government when that government has resolved itself into a government of groups; and still more, that the rule of a dictator, or even a strong tyrant, would be far better tbaji the rule of an omnipotent Cabinet.—I am, Sir,