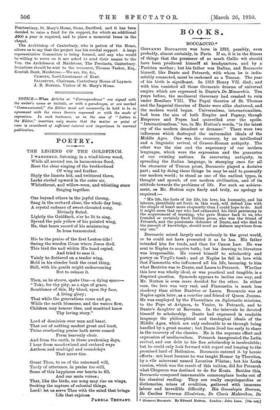 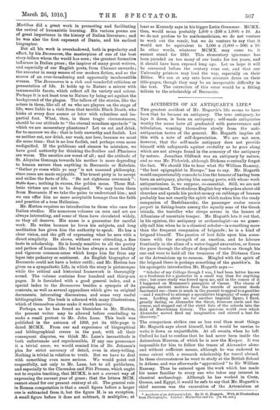 BOCCACCIO.* GIOVANNI BOCCACCIO was born in 1313, possibly, even probably, almost certainly, in Paris. If so, it is in the fitness of things that the possessor of so much Gallic wit should have been produced himself at headquarters, and by a Parisian mother ; but his father was Italian, and Boccaccio himself, like Dante and Petrarch, with whom be is indis- solubly connected, must be reckoned as a Tuscan. The year of his birth is significant. In 1313 Henry VII. died ; and with him vanished all those Germanic dreams of universal empire which are expressed in Dante's De Monarchia. Ten years before, the mediaeval theocracy had crashed to ruin under Boniface VIII. The Papal theories of St. Thomas and the Imperial theories of Dante were alike shattered, and the modern world began. Universalism, internationalism, had been the aim of both Empire and Papacy, though Emperors and Popes had quarrelled over the spoils. "Internationalism," too, in Mr. Iiutton's words, "is the latest cry of the modern decadent or dreamer." There were two influences which destroyed the universalist ideals of the Middle Ages. One was the recovery, by an intellectual and a linguistic revival, of Graeco-Roman antiquity. The other was the rise and the supremacy of our modern languages, which were the expression and the guarantee of our existing nations. In recovering antiquity, in spreading the Italian language, in stamping once for all the character of Tuscan prose, Boccaccio played a decisive part; and by doing these things he may be said to personify our modern world ; to stand as one of the earliest types, in thought and speech, of our modern civilisation, and of its attitude towards the problems of life. For such an achieve- ment, as Mr. Hutton says finely and truly, no apology is required:— " His life, the facts of his life, his love, his humanity, and his labours, plentifully set forth in this work, will defend him with the simple of heart more eloquently than I could hope to do. And it might seem that one who had exhausted his little patrimony in the acquirement of learning, who gave Homer back to us, who founded or certainly fixed Italian prose, who was the friend of Petrarch, and the passionate defender of Dante, and who died in the pursuit of knowledge, should need no defence anywhere from any one."

Boccaccio mixed largely and variously in the great world, or he could not have presented it as he has. His father

intended him for trade, and then for Canon Law. He was sent to Naples to acquire both; but his drawing to literature was irrepressible. He vowed himself to scholarship and poetry on Virgirs tomb ; and at Naples he fell in love with that Fiammetta who influenced all his life, becoming to him what Beatrice was to Dante, and Laura to Petrarch. Whether this love was wholly ideal, or was practical and tangible, is a disputed question. Symonds appears to incline one way, and Mr. Hutton is even more decided for the other. In either ease, the love was very real, and Fiammetta is much less shadowy than either Beatrice or Laura. Boccaccio was at Naples again later, as a courtier and friend of Queen Joanna. He was employed by the Florentines on diplomatic missions, to the Pope at Avignon, to Venice, to Petrarch, and to Dante's daughter at Ravenna. In the intervals be devoted himself to scholarship. Dante had expressed in readable

language the philosophical and theological ideals of the Middle Ages, which are only endurable to us through being handled by a great master; but Dante lived too early to share in the recovery of the classics. He is the supreme effort and expression of mediaevalism. Petrarch inaugurated the Latin revival, and our debt to his fine scholarship is incalculable;

but he could only look forward with regret and longing to the promised land of Hellenism. Boccaccio entered it by heroic efforts : not least because he was taught Homer by Thersiteei by a vile miscreant named Leontius Pilatus ; but his Latin version, which was the result of this tuition, did for Petrarch what Chapman was destined to do for Keats. Besides this, Boccaccio composed innumerable commonplace books out of his classical reading. They are really encyclopaedias or dictionaries, mines of erudition, gathered with immense labour and incredible difficulty. His Genealogia Deorum, De Casibus Virorwm Illustriusn, De Claris Mulieribus, De

* Giovanni Boccacoio. By Edward Hutton. London : John Lane. [1de. net.] Mortibu.s did a great work in promoting and facilitating the revival of humanistic learning. His various poems are of great importance in the history of Italian literature ; and he was also the first exponent of Dante, and his earliest biographer.

But all his work is overshadowed, both in popularity and effect, by his Decameron, the masterpiece of one of the best story-tellers whom the world has seen ; the greatest formative influence in Italian prose ; the inspirer of many great writers, and especially of our English poets, from Chaucer onwards ; the ancestor in many senses of our modern fiction, and so the source of an ever-broadening and apparently inexhaustible stream. The Decameron is a, rich and wonderful criticism or presentation of life. It holds up to Nature a mirror with innumerable facets, which reflect all its variety and colour. Perhaps it is not least true to Nature by being set against the background of the plague. The tellers of the stories, like the actors in them, like all of us who are players on the stage of life, were liable to a visit from that terrible Black Death, who kicks at every door sooner or later with relentless and im- partial foot. What, then, in these tragic circumstances, should be our attitude to "the eternal mundane spectacle" in which we are momentary phantoms ? Let us eat and drink, for to-morrow we die : that is both unworthy and foolish. Let us neither eat, nor drink, nor wash, nor love, because we must die some time : that is no less foolish, and perhaps even more undignified. If the publicans and sinners be mistaken, we have good authority for thinking the Scribes and Pharisees are worse. The ascetics are worst of all ; and the attitude of St. Aloysins Gonzaga towards his mother is more degrading to human nature than anything in Boccaccio or Rabelais. "Gather ye roses while ye may " is not unsound philosophy, since roses are made enjoyable. The truest piety is to accept and utilise the facts of life. "Be not righteous overmuch " : Mtinv &75v; nothing in excess, the golden mean. These Hel- lenic virtues are not to be despised. We may learn them from Boccaccio if we take the pains to understand him ; and we can offer him no more acceptable homage than the faith and practice of a true Hellenism.

Mr. Hutton requires no introduction to those who care for Italian studies. His numerous volumes on men and art are always interesting, and some of them have circulated widely, as they all deserve. His name is a guarantee for careful work. He writes because he loves his subjects, and long meditation has given him the authority to speak. He has a clear vision, and the gift of expressing what he sees with a direct simplicity. He shows, without ever obtruding, a fine taste in scholarship. He is keenly sensitive to all the poetry and pathos of human life; but he has always a most healthy and vigorous common-sense which keeps him far from any lapse into pedantry or sentiment. An English biographer of Boccaccio could not have a better outfit; and Mr. Hutton has given us a sympathetic Life, in which the story is picturesque while the critical and historical framework is thoroughly sound. The volume contains four hundred and thirty-six pages. It is furnished with a good general index, and a special index to the Decameron besides a synopsis of its contents, as well as several appendices which give us original documents, interesting discussions, and some very useful bibliographies. The book is adorned with many illustrations, which of themselves alone make it worth knowing.

Perhaps, as he has found no blemishes in Mr. Hutton, the present writer may be allowed before concluding to make a small protest to Mr. John Lane. This book was published in the autumn of 1909, yet its title-page is dated MCMX. From our sad experience of biographical and bibliographical errors in the past, with all their consequent disputes, we think Mr. Lane's inexactitude is both unfortunate and reprehensible. If any one pronounce it a trivial error, we would remind him of Dr. Johnson's plea for strict accuracy of detail, even in story-telling. Nothing is trivial in relation to truth. But we have to deal with something even more serious. We would point out respectfully, not only to Mr. Lane, but to all publishers, and especially to the Clarendon and Pitt Presses, which ought not to require teaching, that MCMX. is not a correct way of expressing the current year of grace ; that the letters MOM. cannot stand for our present century at all. The general rule in Roman computation is that a small figure before a larger one is subtracted from it, but the figure M. is an exception. A small figure before it does not subtract, it multiplies ; at least so Kennedy says in his bigger Latin Grammar. MOMX. then, would mean probably 1,000 + (100 x 1,000) + 10. As we do not profess to be mathematicians, we do not venture to work out the result, but we do venture to say that it would not be equivalent to 1,000 -I- (1,000 — 100) + 10. In other words, whatever MCMX. may come to, it cannot stand for 1910. This elementary ignorance has been paraded on too many of our books for ten years, and it should have been exposed long ago. Let us hope it will be corrected before the century runs out, and that our University printers may lead the way, especially on their Bibles. We can at any rate have accurate dates on their title-pages, though they may be an insuperable difficulty in the text. The correction of this error would be a fitting tribute to the scholarship of Boccaccio.