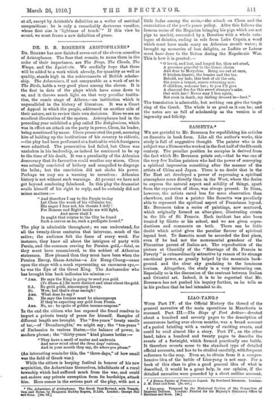 WE are grateful to Mr. Berenson for republishing his articles on Sassetta in book form. Like all the author's works, this study is full of suggestive thought. The painter who is its subject was a Sienese who worked in the first half of the fifteenth century. The peculiar position he occupies is derived from the fact which Mr. Berenson points out,—that he was one of the very few Italian painters who had the power of conveying a spiritual impression something after the manner of the artists of China and Japan. There is no doubt that in the Far East art developed a power of expressing a spiritual atmosphere more directly than in the West, where the desire to express the natural aspect and solidity of thingi, apart from the expression of ideas, was always present. In Siena, however, the artists cared less for mere observation than elsewhere, and thus a painter like Sassetta was peculiarly able to represent the spiritual aspect of Franciscan legend. Mr. Berenson takes a series of paintings, now scattered, which originally formed an altar-piece, illustrating events in the life of St: Francis. Each incident has also been treated by Giotto or his school, and we are given repro- ductions and comments on both. There can be little doubt which artist' gives the peculiar flavour of spiritual legend best. To Sassetta must be accorded the first place, even if he had not the monumental grandeur of the Florentine parent of Italian art. The reproduction of the picture at Chantilly of the "Marriage of St Francis to Poverty" is extraordinarily attractive by reason of its strange emotional power, so greatly helped by the mountain back- ground and the clear sky gradating to the luminous horizon. Altogether, the study is a very interesting one. Especially so is the discussion of the contrast between Italian and Oriental art. Indeed, it is to be regretted that Mr. Berenson has not pushed his inquiry further, as he tells us in his preface that he had intended to do.