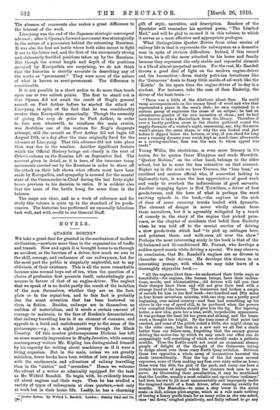 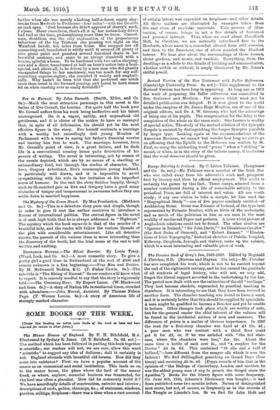 WE take a great deal for granted in the mechanism of modern civilisation,—nowhere more than in the organisation of traffic and transit. Now and again it is brought home to us through an accident, or the heroism of a driver, how much we owe to the skill, courage, and endurance of our railwaymen, but for the most part the public is singularly neglectful, not to say oblivious, of their existence. This is all the more remarkable because nine normal boys out of ten, when the question of a choice of profession first presents itself, unhesitatingly pro- nounce in favour of that of an engine-driver. The neglect that we speak of is no doubt partly the result of the isolation of the men themselves, whether they are on the foot- plate or in the signal-box, and to this fact is probably due the scant attention that has been bestowed on them in fiction. Besides, railways are in themselves an emblem of materialism, and it needs a certain amount of courage to maintain, in the face of Ruskin's denunciations, that railway travelling has in it an element of romance, and appeals in a lurid and melodramatic way to the sense of the picturesque,—e.g., in a night journey through the Black Country. Of this sombre picturesqueness Dickens has left us some masterly impressions in Mugby .Tuncticm, while among contemporary writers Mr. Kipling has distinguished himself by his capacity for writing about machinery as if it were a living organism. But in the main, unless we are greatly mistaken, fewer books have been written of late years dealing with the excitements and adventure of railway travelling than in the "sixties" and "seventies." Hence we welcome the advent of a writer so admirably equipped for the task as Mr. Wilfrid Randell. To begin with, he evidently knows all about engines and their ways. Then he has studied a variety of types of railwaymen at close quarters,—not only at work but in their home life. Lastly, he has a charming • Quaker Rains. By Wilfrid L. Bandell. London : Stanley Paul and Co. V5•3

gift of style, narrative, and description. Readers of the Spectator will remember his spirited poem, "The Limited Mail," and will be glad to re-read it in this volume, to which it serves as a most effective and appropriate prologue.

What distinguishes Quaker Robins from other stories of railway life is that it represents the railwayman as a domestic man in spite of obvious difficulties. Indeed, if this record be true, he is all the more attached to his home and family because they represent the only stable and reposeful element in a life of almost perpetual motion. For the rest, Mr. Randell throws a good deal of light on the modern engine-driver and his locomotive,—from stately patrician leviathans like the 'Guinevere' down to fussy little maids-of-all-work like the Kettle.' In his spare time the engine-driver of to-day is a student. For instance, take the case of Sam Enderby, the driver of the boat-train :—

"There was a little of the dilettante about Sam. He could vamp accompaniments on the uneasy blend of wood and wire that represented a piano in the men's club ; he once explained to a curious group of engineers the cause of an eclipse ; he had an adventurous gambit of his own invention at chess ; and he had been known to take a Maeterlinck from the library. Therefore if ever a knotty problem arose in the cluster gathered round the supply-furnaces of a winter's night, concerning, say, why the moon wasn't always the same shape, or why the sun looked oval just before it dipped below the horizon, or why, if you stood for long near a running dynamo your watch kept as much time afterwards as a sewing-machine, Sam was the man to whom appeal was made."

Young Willis, the electrician, is even more literary in his tastes, for he quotes Omar Khayyam and reads Meredith. "Quaker Robins," on the other hand, belongs to the older school, but he is none the less attractive on that account. Higher up in the scale we have Travers, the "loco boss," an excellent and zealous official who, if somewhat lacking in diplomatic tact, is none the less appreciative of good work and ready to overlook the indiscretions of good servants. Another engaging figure is Ned Trewithen, a driver of fast goods-trains, and the hero of what is perhaps the most exciting episode in the book,—the capture in the nick of time of some runaway trucks loaded with dynamite. The element of danger is never wholly absent from these narratives, but it is agreeably mitigated by a touch of comedy in the story of the engine that picked prim- roses, or the chapter of accidents that befell Sam Enderby when he was told off to the menial service of driving a slow goods-train which had "to pick up cabbages here, and potatoes there, and milk-cans all over the show." Perhaps the most interesting study in the book is that of the ill-balanced and ill-conditioned Mr. Pannet, who develops a sudden speed-mania while driving a speciaL We may observe, in conclusion, that Mr. Randell's engines are as diverse in character as their drivers. He develops this theme in an interesting passage, with which we may take leave of a thoroughly enjoyable book :— " All the engines liked Sam—he understood their little ways so beautifully—for engines, like human beings, have their inclina- tions, moods, and whimsicalities ; old drivers will tell you that their charges know them and will not give their best with a strange hand at the levers. The Guinevere had broken a couple of records for him in her first week—two hundred and fifty miles in four hours seventeen minutes, with one stop, was a pretty good beginning, over mixed country—and Sam had something up his sleeve in the way of speed still, to be produced when the powers who compiled time-tables should give him the tip. Her tapering boiler, a new idea, gave her a lean, swift, torpedo-like appearance, It was perhaps the least bit too green and shining, and the brass. work a thought too bright. By the time some of that paint had cracked, and some of the polish soiled a little, she might chum up to the older ones ; but then in a new suit we all feel a shade better than our fellow-men, forgetting that the smeary genius driving the motor-bus by which we may reach our office can do surpassingly well something of which we should make a pathetic muddle. Thus the Kettle could not resist an occasional steamy gurgle of delight at the thought of the Guinevere trying to dodge about over those crazy North Quay switches. Between these two opposites a whole array of locomotives haunted the sheds intermittently. Near the top of the list came several expresses, none of them making any fuss over sixty miles an hour; these were the elite, the pick of the pack, and every one bore a certain trimness of aspect which the cleaners took care to pre- serve. As illustrating their peculiarities, it may be mentioned that the Lucifer, usually a most reliable and up-to-time 'ordinary,' had been known to jib most unaccountably and improperly under the imagined insult of a fresh driver, after running sweetly for months. The Mastodon—to come a step lower in the social scale—a dull, solemn pilot-engine, which as a rule made nothing of towing a heavy goods-train for as many miles as she was asked, once 'sat down.' coughed plaintively, and flatly refused to go any farther when she was merely whisking half-a-dozen empty clay- trucks from Merivale to Fretherne—four miles !—with the throttle an inch open. ' Just because she didn't approve of alavey's work, I s'pose. Sheer cussedness, that's all it is,' her melancholy driver had said at the time, philosophising more than he knew. Cussed- ness, doubtless, was the only explanation of the preposterous behaviour of the big Tristram one pouring wet night on the Wainload Levels, ten miles from home. Site snapped her off connecting-rod, brandished it wildly until it scraped off plenty of nice green paint and punched several fair-sized dents in her beautiful anatomy, and came to an abrupt standstill with a hoarse, spiteful wheeze. To be burdened with two extra sleeping- ears and a diner, transformed at half an hour's notice into a boat- special, and, above all, to be driven by a new man who did ghastly unexpected things to her machinery, was too much for any self- respecting express-engine ; she resented it noisily and emphati- cally. Why hadn't he been told that she preferred one notch more than usual in the forward gearing, and hated to have steam let on when coasting ever so easily downhill ?"