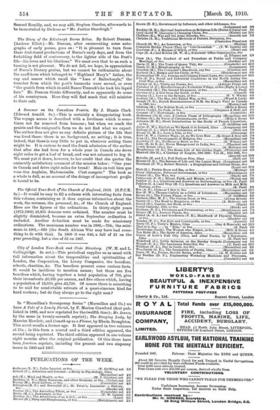 The Story of the Edinburgh Burns Belies. By Robert Duncan.

(Andrew Elliot.)—Mr. Duncan, after enumerating some auto- graphs of early poems, goes On: "It is pleasant to turn from these drab-toned productions of Burns's early days, and from the forbidding field of controversy, to the lighter side of the Poet's life—his loves and his libations!' We must own that to us such a turning is not pleasant. We do not fail, we hope, in appreciation of Burns's literary genius, but we cannot be enthusiastic about the snuff-horn which belonged to "Highland Mary's" father, the cup and saucer which recall the "Lass o' Balloehmyle," the trencher from which the poet's bannocka were served, or even "the qnaich from which in mild Nance Tinnock's he took his liquid fare." Mr. Duncan thinks differently, and so apparently do some of his countrymen. Here they will find much that will minister to their cult.