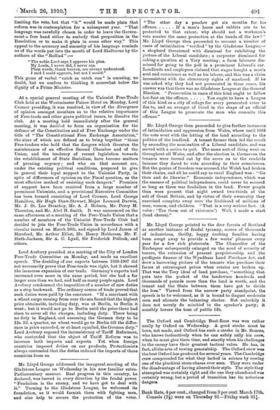 Lord Avebury presided at a meeting of the City of

London Free-Trade Committee on Monday, and made an excellent speech. The doubling of our exports between 1880-1907 did not necessarily prove that Free-trade was right, but it showed the immense expansion of our trade. Germany's exports had increased even more in the same period, but she had a far larger area than we had, and half as many people again. Lord Avebury condemned the imposition of a number of new ditties as a step backward. The ordinary course of trade proved that such duties were paid by the consumer. "If a merchant with a wheat cargo coming from over the sea found that the highest price obtainable, including duty, was at Berlin, to Berlin it went ; but it would not go to Berlin until the price there had risen to cover all the charges, including duty. There being no duty in England, and assuming the German duty to be 12s. 2d. a quarter, no wheat would go to Berlin till the differ- ence in price exceeded, or at least equalled, the German duty." Lord Avebury exposed the inconsistency of Tariff Reformers, who contended that the object of Tariff Reform was to increase both imports and exports. Yet when foreign countries imposed duties on our products, Protectionists always contended that the duties reduced the imports of those countries from us.