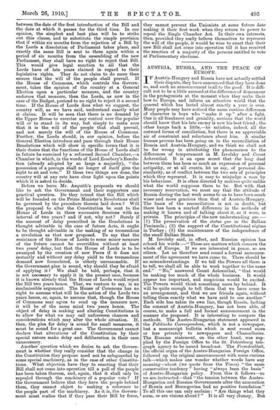 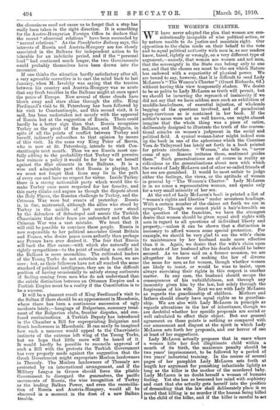 IF Austria-Hungary and Russia have not actually settled their dispute, they have announced that they have done so, and such an announcement is all to the good. It is diffi- cult not to be a little amused at the difference of demeanour in the protagonists at the moment when they make their bow to Europe, and inform an attentive world that the quarrel which has lasted almost exactly a year is over. Many people may have noticed the same curious difference of character in boys who "make it up" after a fight. One is all frankness and geniality, anxious that the world should know that his late enemy is now his best friend ; the other hangs back a little,—he satisfies, indeed, all the outward forms of conciliation, but there is an appreciable air of constraint and reluctance about him. A similar human process has been going on in the reconciliation of Russia and Austria-Hungary, and we think we shall not be far wrong in attributing the phenomenon to the differences of temperament in M. Isvolsky and Count Aehrenthal. It is an open secret that the long duel between them has been as much an expression of personal antipathy, or at all events, let us say, of personal dis- similarity, as of conflict between the two sets of principles which they represent. It is easy to misjudge a man by his behaviour. It is often directed by motives quite unlike what the world supposes them to be. But with that necessary reservation, we must say that the attitude of Russia during the last week seems to us to have been much wiser and more gracious than that of Austria-Hungary. The basis of the reconciliation is not in doubt, but there has been a marked difference in the methods of making it known and of talking about it, as it were, in private. The principles of the new understanding are :— (1) The preservation of the status quo in the Balkan Peninsula ; (2) the support of the Constitutional regime in Turkey ; (3) the maintenance of the independence of the small Balkan States.

M. Isvolsky said, in effect, and Russian opinion has echoed his words :—" These are matters which concern the whole of Europe. If we are interested in peace, so are others. Let us therefore send round a formal announce- ment of the agreement we have come to. There should be no misunderstandings. If we tell the Powers all there is to tell, we shall all be able to work together to the same end." "No," answered Count Aehrenthal, "that would be making too much of the whole business. It would appear too important, and suspicions would be excited. The Powers would think something more lay behind. It will be quite enough to tell them that we have come to an arrangement, and that we are friends again, without telling them exactly what we have said to one another." Each side has taken its own line, though Russia, lacking the consent of Austria-Hungary, has not been able, of course, to make a full and formal announcement in the manner she proposed. It is interesting to compare the methods. The Austro-Hungarian statement appeared in the Politische Correspondenz, which is not a newspaper, but a manuscript bulletin which is sent round more or less privately to newspapers and Chancelleries. The Russian statement, on the other hand, was sup- plied by the Foreign Office to the St. Petersburg tele- graph agency to be issued broadcast. The Fremdenblatt, the official organ of the Austro-Hungarian Foreign Office, followed up the original announcement with some curious talk—which makes one wonder whether words have any meaning—about (we quote from the Times) "the same conservative tendency" having "always been the basis" of Austro-Hungarian policy. From this it follows—so we are instructed—that "the tension between the Austro- Hungarian and Russian Governments after the annexation of Bosnia and Herzegovina had no positive foundation." To all this one can only exclaim : "Are things what they seem, or are visions about ? " It is all very clumsy.. But the clumsiness need not cause us to forget that a step has really been taken in the right direction. It is something for the Austro-Hungarian Foreign Office to declare that the recent "abnormal relations" have been succeeded by "normal relations." As the Frankfurter Zeitung says, the interests of Russia and Austria-Hungary are too closely issociated in the Balkans for independent action to be tolerable for an indefinite period, and if the "personal feud" had continued much longer, the two Governments would probably themselves have been drawn into the encounter.

If one thinks the situation hardly satisfactory after all, a very agreeable corrective is to cast the mind back to last January, when M. Isvolsky was saying that the tension between his country and. Austria-Hungary was so acute that any fresh troubles in the Balkans might at once upset the peace of Europe. Now several of those clouds have blown away and, stars shine through the rifts King Ferdinand's visit to St. Petersburg has been followed by his visit to Constantinople, and this second visit, it is said, has been undertaken not merely with the approval of Russia but at the suggestion of Russia. There could hardly be a better sign than that. Russia recognises Turkey as the pivot of the Balkans, and Bulgaria, in spite of all the points of conflict between Turkey and herself, indirectly subscribes to that opinion by means of this visit. In the same way King Peter of Serria, who is now at St. Petersburg, intends to visit Con- stantinople next month. Thus we see Russia most use- fully adding to the probability that Turkey will perceive how ruinous a policy it would be for her to set herself against the Slav elements in the Balkans. It is a wise and admirable part that Russia is playing, but we must not forget that lions may lie in the path of every one and have no respect for virtue. Inside Turkey there is a strong nationalist party which would like to make Turkey once more respected for her ferocity, and this party thinks and argues as though the dispute about the Holy Places, the Russian challenge to Turkey, and the Crimean War were but events of yesterday. Russia is, in fine, mistrusted, although the allies who stood by Turkey in the middle of last century now stand by the defenders of Sebastopol and assure the Turkish Chauvinists that their fears are unfounded and that the Crimean War was a vast mistake. We trust that it will still be possible to convince these people. Russia is now responsible to her political associates Great Britain and France, who desire peace more ardently than perhaps any Powers have ever desired it. The fear that Russia will back the Slav cause—with which she naturally and rightly sympathises—to the point of exciting a conflict in the Balkans is mere moonshine. The cultivated leaders of the Young Turks do not entertain such fears, we are sure ; but, as their followers have not all reached the same standard of political intelligence, they are in the difficult position of having occasionally to satisfy strong outbursts of feeling coming from men who do not understand that the subtle distinction between an Ottoman Empire and a Turkish Empire must be a reality if the Constitution is to be a success.

It will be a pleasant result of King Ferdinand's visit to the Sultan if there should be an appeasement in Macedonia, where there has been a continuous succession of ugly incidents lately,—hangings of Bulgarians, summary treat- ment of the Bulgarian clubs, frontier disputes, and con- fused recriminations. A Turkish Deputy has introduced in the Chamber a Bill for expropriating Bulgarian and Greek landowners in Macedonia. It can easily be imagined how such a measure would "appeal to the Chauvinistic instincts of the extreme left wing of the Young Turks, but we hope that little more will be heard of it. It would hardly be possible to reconcile approval of such a" Bill with the protests the Turkish Government has very properly made against the suggestion that the Greek Government might expropriate Moslem landowners in Thessaly. The Moslem landowners of Thessaly are protected by an international arrangement, and if the Military League in Greece should force the pliable Government to disregard the guarantees, the pacific movements of Russia, the wise recognition of Turkey as the leading Balkan Power, and even the reconcilia- tion of Russia and Austria-Hungary, would all be obscured in a moment in the dust of a new Balkan trouble.