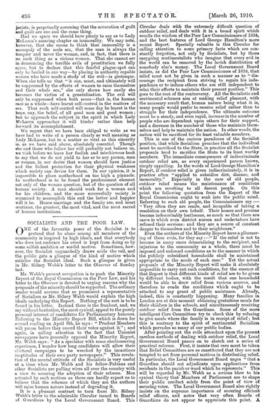 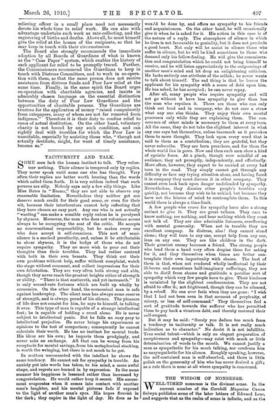 SOCIALISTS AND THE POOR LAW.

ONE of the favourite poses of the Socialist is to pretend that he alone among all members of the community is inspired by high ideals, and that everybody who does not embrace his creed is kept from doing so by some selfish ambition or sordid motive. Sometimes, how- ever, the Socialist unguardedly draws aside the veil, and the public gets a glimpse of the kind of motive which satisfies the Socialist ideal. Such a glimpse is given in Mr. Sidney Webb's letter to the Observer of Sunday last.

Mr. Webb's present occupation is to push the Minority Report of the Royal Commission on the Poor Law, and his letter to the Observer is devoted to urging reasons why the proposals of the minority should be supported. The ordinary reader would assume that so prominent a representative of Socialism as Mr. Sidney Webb would explain the high ideals underlying this Report. Nothing of the sort is to be found in his letter. Instead there is the frankest, and, we say without hesitation, the most cynical, appeal to the purely personal interest of candidates for Parliamentary honours. Referring to the Minority Report Bill, which is down for second reading on April 8th, he says : "Prudent Members will pause before they record their votes against it " ; and again, in calling attention to the fact that Unionist newspapers have generally opposed the Minority Report, Mr. Webb says : "As a spectator with some electioneering experience, I wonder how long candidates will allow their electoral campaigns to be wrecked by the incautious ineptitudes of their own party newspapers." This revela- tion of the mental attitude of the Socialists is very useful at a time when Mr. Webb and his fellow-Fabians and other Socialists are pulling wires all over the country with a. view to securing the adoption of their scheme. Men actuated by such motives as these can hardly expect us to believe that the schemes of which they are the authors will raise human nature instead of degrading it.

It is a pleasant contrast to turn from Mr. Sidney Webb's letter to the admirable Circular issued to Boards of Guardians by the Local Government Board. This Circular deals with the extremely difficult question of outdoor relief, and deals with it in a broad spirit which recalls the wisdom of the Poor Law Commissioners of 1834, and the best features of Lord George Hamilton's more recent Report. Specially valuable is this Circular for calling attention to some primary facts which are con- stantly forgotten, not only by Socialists, but by those easygoing sentimentalists who imagine that every evil in the world can be removed by the lavish distribution of somebody else's money. The Local Government Board insists, as did the Poor Law Commissioners of 1834, that relief must not be given in such a manner as to "dis- courage the recipient from striving to regain his inde- pendence or to induce others who are still independent to relax their efforts to maintain their present position." This goes to the root of the controversy. All the Socialistic and sentimental schemes aim at making relief pleasant, with the necessary result that, human nature being what it is, many people would prefer to receive relief rather than to struggle for their independence. The ultimate outcome must be a steady, and even rapid, increase in the number of people who are dependent upon others for their support, and a decrease in the number of those who maintain them- selves and help to maintain the nation. In other words, the nation will be sacrificed for its least valuable members.

This is one of the curious paradoxes of the Socialist position, that while Socialism preaches that the individual must be sacrificed to the State, in practice all the Socialist proposals tend to sacrifice the State to its least worthy members. The immediate consequences of indiscriminate outdoor relief are, as every experienced person knows, simply appalling. In the words of Lord George Hamilton's Report, if outdoor relief is given indiscriminately, it is in practice often "applied to subsidise dirt, disease, and immorality." Especially in the case of old people, outdoor relief means the maintenance of conditions, which are revolting to all decent people. On this point the following quotation from the Report of the Royal Commission ought to soak into the public mind. Referring to such old people, the Commissioners say :— "Very often they are senile, and incapable of taking a resolution on their own behalf. Their homes and persons become indescribably loathsome, so much so that there are cases in which even district nurses and undertakers have refused their services : and they are a source of constant danger to themselves and to their neighbours."

Even the authors of the Minority Report have a glimmer- ine- i of these evils, for they say :—" If the relief not to become in many cases demoralizing to the recipient, and injurious to the community as a whole, there must be imposed and enforced conditions as to the manner in which the publicly subsidized households shall be maintained appropriate to the needs of each case." Yet the actual proposals of the Minority Report will make it absolutely impossible to carry out such conditions, for the essence of that Report is that different kinds of relief are to be given by different bodies, with the result that one household would be able to draw relief from various sources, and therefore to evade the conditions which ought to be attached to any grant of public assistance. Already, indeed, this is constantly happening. Many families in London are at this moment obtaining gratuitous meals for their children in the schools, and simultaneously receiving outdoor relief from the Guardians. Some of the more intelligent Care Committees try to check this by refusing to give meals where the family is in receipt of relief ; but this is contrary to the spirit of sentimental Socialism which pervades so many of our public bodies.

After pointing out the evils attendant upon the present careless methods of dealing with outdoor relief, the Local Government Board passes on to sketch out a series of practical reforms. First, it insists that care must be taken that Relief Committees are so constituted that they are not tempted to act from personal motives in distributing relief. In particular, the Local Government Board urges that a Guardian should not adjudicate upon applications from residents in the parish or ward which he represents." This will be regarded by Mr. Webb as a serious blow to his cynical theory that Members of Parliament are to shape their public conduct solely from the point of view of securing votes. The Local Government Board also rightly insists on the supreme importance of securing efficient relief officers, and notes that very often Boards of Guardians do not appear to appreciate this point. A

relieving officer in a small place need not necessarily devote his whole time to relief work. He can also with advantage undertake such work as rate-collecting, and the registering of births and deaths. Above all, he must himself give the relief at the homes of the recipients, so that he may keep in touch with their circumstances. The Board also strongly recommends the immediate adoption by all Boards of Guardians of what is known as the "Case Paper" system, which enables the history of each applicant for relief to be promptly traced. Further, the Commissioners recommend the Guardians to keep in touch with Distress Committees, and to work in co-opera- tion with them, so that the same person does not receive assistance from distress funds and. Poor Law relief at the same time. Finally, in the same spirit the Board urges co-operation with charitable agencies, and insists in admirably chosen language on the essential distinction between the duty of Poor Law Guardians and the opportunities of charitable persons. The Guardians are trustees for the application of money "raised compulsorily from ratepayers, many of whom are not far removed from indigence." Therefore it is their duty to confine relief to cases of actual destitution. On the other hand, voluntary charity is not bound by any such condition, and. can rightly deal with troubles for which the Poor Law is unsuitable, especially by assisting those who, "though not actually destitute, might, for want of timely assistance, become so."