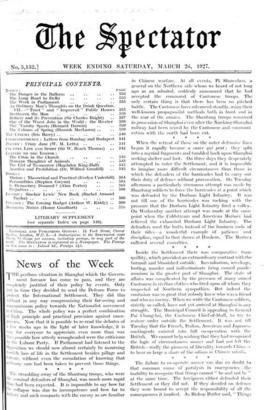 Page 1, 26 March 1927 — Inside the Settlement there was comparative tran- quillity, which provided
Close

Inside the Settlement there was comparative tran- quillity, which provided

an extraordinary contrast with the turmoil and bloodshed outside. Incendiarism, wreckage, looting, murder and indiscriminate firing caused pande- monium in the greater part of Shanghai. The state of affairs was complicated by the presence of many armed Cantonese in civilian clothes who fired upon all whom they suspected of Northern sympathies. But indeed the confusion was so great that nobody knew who was a friend and who an enemy. When we write the Cantonese soldiers, strictly so called, have not yet arrived at Shanghai in any strength. The Municipal Council is appealing to General Pai Chung-hsi, the Cantonese Chief-of-Staff, to try to restore order outside the Settlement. It was not till Tuesday that the French, Italian, American and Japanese contingents entered into full co-operation with the British. We cannot help wishing that they had recognized the logic of circumstances sooner and had not left the British—really the pioneers of liberality towards China— to bear so large a share of the odium in Chinese minds.