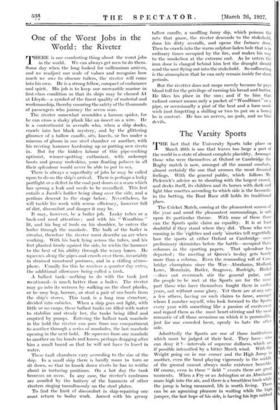 One of the Worst Jobs in the World : the

THERE is one comforting thing about the worst jobs in the world. We can always get men to do them. Some day when the long looked for millennium arrives, and we readjust our scale of values and recognize how much we owe to obscure toilers, the riveter will come into his own. He is a strong fellow, compact of endurance and spirit. His job is to keep our mercantile marine in first-class. condition so that its ships may be classed Al at Lloyds—a symbol of the finest quality of material and workmanship, thereby ensuring the safety of the thousands of passengers who journey the seven seas.

The riveter somewhat resembles a human spider, for he can cross a shaky plank like an insect on a wire. He is a contortionist in overalls who, when a ship docks, crawls into her black mystery, and by the glittering glimmer of a tallow candle, sits, kneels, or lies under a miasma of gloom in one steel chamber or another, with his riveting hammer hardening up or putting new rivets in. But for the hidden labour of this pipe-sucking optimist, winner-spotting enthusiast, with unkempt boots and greasy moleskins, your floating palaces in all their splendour would never be able to put to sea.

There is always a superfluity of jobs he may be called upon to do on the ship's arrival. There is perhaps a leaky portlight or a defect in the coal port doors or a scam which has sprung a leak and needs to be recaulked. This last entails a Jacob's ladder being slung over the side, and a perilous descent to the stage below. Nevertheless, he will tackle his work with serene efficiency, however full of dirt, discomfort and danger it may be.

It may, however, be a boiler job. Leaky tubes or a back-end need attention ; and with his " Woodbine " lit, and his bag of tools on his shoulder, he enters the boiler through the manhole. The bulk of the boiler is circular, therefore the riveter must describe an arc when working. With his back lying across the tubes, and his feet planted firmly against the side, he wields the hammer to the best of his ability through the weary hours. He squeezes along the pipes and crawls over them, invariably in strained unnatural postures, and in a stifling atmos- phere. Usually for this he receives a quarter day extra, the additional allowance being called a tank.

A ballast tank—nothing to do with the tank just mentioned—is much better than a boiler. The riveter may go into its wetness by walking on the short planks, or he may beg, borrow, or steal a pair of sea-boots from the ship's stores. This tank is a long iron structure, divided into cubicles. When a ship goes out light, with little or no cargo, these ballast tanks are filled with water to stabilize and steady her, the tanks being filled and emptied by pumps. Entering the ballast tank manhole in the hold the riveter can pass from one compartment to another through a series of manholes, the last manhole opening in the next hold. He squeezes from one manhole to another on his hands and knees, perhaps dragging after him a small board so that he will not have to kneel in water.

These tank chambers vary according to the size of the ship. In a small ship there is hardly room to turn or sit down, so that to knock down rivets he has to writhe about in torturing positions. On a hot day the tank becomes an oven. In any case,. the riveter's eardrums are assailed by the battery of the hammers of other riveters ringing tumultuously on the steel plates.

To find the limit of discomfort in ship-repairing one muSt return to boiler work. Armed with his greasy tallow candle, a snuffling fumy dip, which poisons the rats that gnaw, the riveter descends to the stokehold, dons his dirty overalls, and opens the furnace door. Then he crawls into the warm sulphur-laden hole that is in ordinary times occupied by the fire, and makes his way to the smokebox at the extreme end. As he enters the iron door is clanged behind him lest the draught should send the soot flying out into the stokehold. So suffocating is the atmosphere that he can only remain inside for short periods.

But the rivetter does not mope merely because he pays blood toll for the privilege of earning his bread and butter. He likes his place in the sun ; and if to him that radiant corner means only a packet of " Woodbines." or a pipe, or occasionally a pint of the best and a ham sand- wich (not forgetting a shilling or two to put on a horse) he is content. He has no nerves, no gods, and no blue devils.