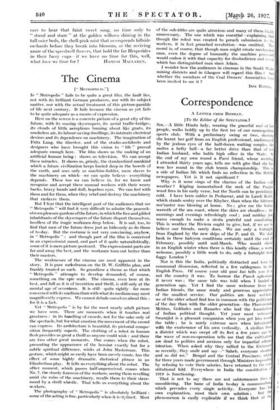 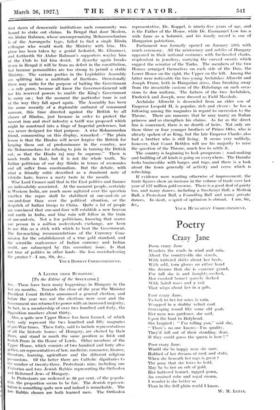 A LETTER FROM BOMBAY.

[To the Editor of the SPECTATOR.1 SIR,—A little Hindu lady, wearing the graceful sari of her people, walks boldly up to the first tee of our cosmopolitan sports club. With a preliminary swing or two, showing she learnt her golf from an English professional, undismayed by the jealous eyes of the half-dozen waiting couples, 41e smites a hefty ball—a far better drive than that of her Indian husband, who holds high office in the State. It the end of my own round a Parsi friend, whose wedding I attended thirty years ago, tells me with glee that she ha, won her round in the club tennis championship. This is a side of Indian life which finds no reflection in the

newspapers. Yet is it not significant ?

Why is it none sings of the charms of the Indian cal weather ? Kipling immortalized the reek of the Punjab wood fires in his early verse, but the North can be perishingly cold. I have been colder in Peshawar, and in Landi Kotai, which stands sentry over the Khyber, than when the bitterest nor'easter was blowing at home. No ; give me the balmy warmth of the sea coast, where the skies are cloudless ; the mornings and evenings refreshingly cool ; and midday jut warm enough to make a siesta grateful and comforting. This is weather the Riviera ought to give, but, if we are to believe our friends, rarely does. We are only a fortnight from England by the new ships of the P. and 0. We shall bask in these halcyon conditions certainly until the end of February, possibly until mid-March. Who would shiver in an English winter when there is this kindly clime, a warm welcome, possibly a little work to do, only a fortnight from foggy London ?

Nor is this the India, politically distracted and torn by communal dissension, reflected in a few cablegrams in the English Press. Of course your old quid hai tells you it is not the country it was. To borrow the Punch aphorism, it never was ; the same talc was told when I landed a generation ago. Yet I find the same welcome from illy Indian friends, the same ready and generous appreciation of the smallest service. Our politics are here red-hot; we of the older school find less in common with the politicians of the day than with the older generation—the Pherozeshali Mehtas, Gokhales and Ranades who laid the foundatints of Indian political thought. Yet your most vellemen Swarajist is a pleasant companion when you get him round the table ; he is rarely extreme save when intoxicated with the exuberance of his own verbosity. A civilian from a district which was swept off its feet a few years ago by the wave of non-co-operation tells me that the cultivators are dead to politics and anxious only for impartial admit: istration. When asked why they rallied to the Extremist so recently, they smile and say—" Saheb, everyone shouted and so did we." Bengal and the Central Provinces. which for three years made government through Ministers imp ossill by refusing to vote their salaries, have returned to the eon stitutional fold. Everywhere in India the constitution 1919 is functioning. That is not to say there are not subterranean sires smouldering. The bane of India to-day is communalism, which pervades every single activity. Everyone has II own explanation, most their own solution ; . but t phenomenon is easily explicable if we think that at ti first dawn of democratic institutions each community was bound to stake out claims. In Bengal that dour •Moslem, Sir Abdur Rahman, whose uncompromising 5Iohammedanism is of the Aurungzebe type, failed to find a single Hindu colleague who would work the Ministry with him. Ills place has been taken by a genial hedonist, Mr. Ghuznavi, and forthwith Sir Abdur Rahman's supporters waylay him at the Club to bid him desist. If dyarchy again breaks down in Bengal it will be from no defect in the constitution, but because personalities are too strong to permit a stable Ministry. The various parties in the Legislative Assembly are splitting into a multitude of fractions. Occasionally these may unite for the purpose of baiting the Government —a safe game, because all know the Governor-General will use his reserved powers to enable the King's Government to carry on ; but the moment the particular issue is out of the way they fall apart again. The Assembly has been the scene recently of a deplorable outburst of communal rancour, this time directed against the British by all classes of Hindus, just because in order to protect the nascent iron and steel industry a tariff was proposed which might be construed into a tinge of Imperial preference, but was never designed for that purpose. A wise Mohammedan friend, commenting on this display, remarked—" The plain lesson is that the Hindus will never forgive the British for keeping them out of predominance in the country, nor the Mohammedans for refusing to join in turning the British out, so that the Hindu raj may be supreme." There is much truth in that, but it is not the whole truth. No Indian politician of our day thinks in terms of economies and all suffer from emotionalism. But the debate, with what a friendly critic described as a dominant note of vitriolic hate, leaves a nasty taste in the mouth.

Wise Lord Cromer said that in the East polities and finance are indissolubly associated. At the moment people, certainly in Western India, arc much more agitated over the question whether the rupee shall be stabilized at one-and-six or one-and-four than over the political situation, or the despatch of Indian troops to China. Quite a lot of people are convinced that one-and-four will establish a new heaven and earth in India, and blue ruin will follow in the train of one-and-six. Not a few politicians, knowing that scarce one person in a million understands exchange, are keen to use this as a stick with which to beat the Government. The far-reaching recommendations of the Currency Com- mission for the establishment of a true gold standard, and the scientific coalescence of Indian currency and Indian credit, are submerged by this secondary issue. Is that not true of politics in other lands—the less overshadowing the greater am, Sir, &c., YOUR BOMBAY CORRESPONDENT.