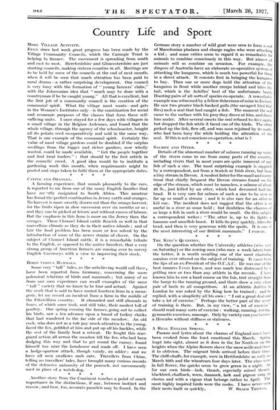 Page 14, 26 March 1927 — Another story from the Continent touches a point of much
Close

Another story from the Continent touches a point of much

importance in the distinctions, if any, between instinct and reason ; and here, too, accurate parallels may be found. In the

German story a number of wild goat were seen to form a sort of Macedonian phalanx and charge eagles who were attacking a kid ; and some critics seem to regard it as remarkable for animals to combine consciously in this way. But almost all animals will so combine on occasion. For example, the dingoes of Australia have an elaborate co-operative system of attacking the kangaroo, which is much too powerful for them in a direct attack. It consists first in bringing the kangaroo to bay. Then one or more dogs hold the attention of the kangaroo in front while another creeps behind and bites the tail, which is the Achilles' heel of the unfortunate beast. Hunting pairs of all sorts of species co-operate. A remarkable example was witnessed by a fellow-fisherman of mine in Ireland. He saw two greater black-backed gulls (the savagest bird that flies) mob a seal that had caught a fish. The moment the seal came to the surface with his prey they drove at him, and drove him under. After several onsets the seal refused to dive again, but dropped the fish while it faced one of the birds. The other picked up the fish, flew off, and was soon rejoined by its mate, who had been busy the while holding the attention of the seal. If this is not conscious co-operation, what is ?