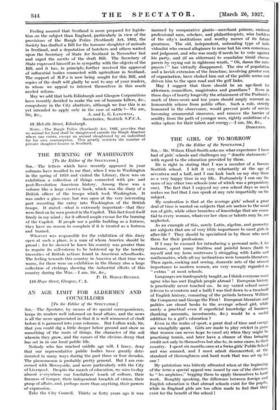 THE BURNING OF WASHINGTON

Sin,—The letters which have recently appeared in your columns have recalled to me that, when I was in Washington in the spring of 1919 and visited the Library, there was on exhibition a collection of things connected with pre- and post-Revolution American history. Among these was a volume like a large exercise book, which was the diary of a British officer of the troops which took Washington. It was under a glass case, but was open at the very interesting part recording the entry into Washington of the British troops. It stated—what is extremely important—that they were fired on by men posted in the Capitol. This fact fixed itself firmly in my mind ; for it offered ample excuse for the burning of the Capitol. If people use a public building as a fortress, they have no reason to complain if it is treated as a fortress and burned.

Whoever was responsible for the exhibition of this diary open at such a place, is a man of whom America should be proud ; for he showed he knew his country was greater than to require its self-esteem to be bolstered up by the tawdry travesties of British actions found in American schoolbooks. The feeling towards this country in America at that time was warm, for there were on exhibition in the library also a large collection of etchings showing the industrial efforts of this country during the War. —I am, Sir, &c.,