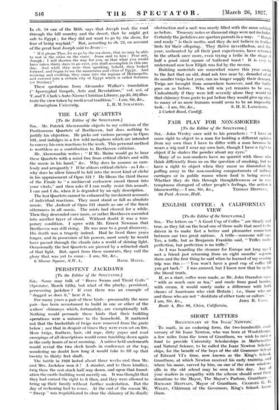 [To the Editor of the SPECTATOR.] SIR,--The letters on " A Good Cup of Coffee " are timely ant true, as they hit on The head one of those nails that need to Ic driven in to make fast a better and pleasanter connexion between our two great nations. A trifle—someone will say. Yes, a trifle, but as Benjamin Franklin said, ." Trifles mike perfection, but perfection is no trifle."

As I was boarding the steamer for Europe not long :no I met a friend just returning from an eight months' sojourn there and the first thing he said when he learned of my coming trip was this :--" You won't have a good cup of coffee till you get back." I was amused, but I know now that he sp.)ke the literal truth.

• If, as a start, coffee were made, as Mr. John Oxendon say, " with as much care as tea," and made from good berrio, with cream, it would surely make a difference with both classes of Americans who visit -Britain -; i.e., those who arc and those who are not " destitute of either taste or culture: - r am, Sir, &c., JOHN R. CASE. Route 4, Box 80, Chico, California.