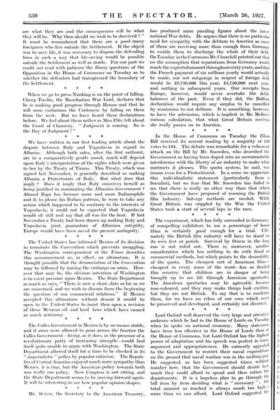 In the House of Commons on Tuesday the Films Bill

received its second reading by a majority of 243 votes to 133. The debate was remarkable for a vehement attack on the Bill by Mr. Snowden, who described the Government. as haying been duped into an unwarrantable interference with the liberty of an industry to make what contracts it pleases. The quota system, he said, was insane even for a Protectionist. In a sense we appreciate this individualistic statement (particularly from a Socialist), but we fear that Mr. Snowden has failed to sec that there is really no other way than that which the Government have proposed of rescuing the British film industry. Salvage methods are needed. While Great Britain was crippled by the War the United States took a start of several laps in the race.