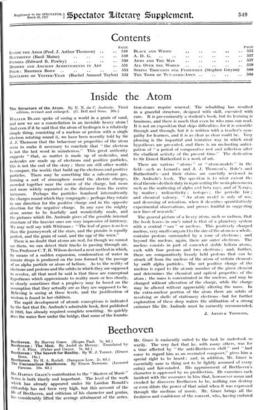 Inside the Atom The Structure of the Atom. By E.

N. da C. Andrade. Third edition, revised and enlarged. (G. Bell and Sons. 30s.) WILLIAM BLAKE spoke of seeing a world in a grain of sand, and now we see a constellation in an invisible heavy atom !

And even if it be said that the atom of hydrogen is a relatively simple thing, consisting of a nucleus or proton with a single electron rotating round it, we have been recently told by Sir J. J. Thomson that the behaviour or properties of the atom seem to make it necessary to conclude that " the electron is not the last word in minuteness." This great authority suggests " that, as matter is made up of molecules, and molecules are made up of electrons and positive particles, this is not the end of the story ; there are still other worlds to conquer, the worlds that build up the electrons and positive particles. There may be something like a sub-atomic gas, forming a sort of atmosphere round the electric charges, crowded together near the centre of the charge, but more and more widely separated as the distance from the centre increases. Perhaps the particles bombard intermittently the charges round which they congregate ; perhaps they rotate in one direction for the positive charge and in the opposite tlireetion for the negative charge. In any case the mighty atom seems to be fearfully and wonderfully made, and the pictures which Dr. Andrade gives of the possible internal structure of the heavier ones arc very impressive of intricacy. We may well say with Whitman : " The leaf of grass is no le-is than the journeywork of the stars, and the pismire is equally perfect, and the grain of sand, and the egg of the wren."

There is no doubt that atoms arc real, for though we cannot see them, we can detect their tracks in passing through air. Thus Professor C. T. R. Wilson devised a neat method in which, by means of a sudden expansion, condensation of water in minute drops is produced on the ions formed by the passage of an alpha particle or atom of helium. As to the reality of electrons and protons and the orbits in which they are supposed to revolve, all that need be said is that these are conceptual hypotheses which approximate to reality more or less closely, so closely sometimes that a prophecy may be based on the assumption that they actually are as they are supposed to be. Believing is seeing at these levels, and the justification of wisdom is found in her children.

The rapid development of atomic conceptions is indicated by the fact that Dr. Andrade's admirable book, first published in 1923, has already required complete rewriting. So quickly does the water flow under the bridge, that some of the founda-

tion-stones require renewal. The rebuilding has resulted in a graceful structure, designed with skill, executed with care. It is pre-eminently a student's book, but its learning is

luminous, and there is much that even he who runs can read. It is not an exposition that skips difficulties, for it is scientific through and through, but it is written with a teacher's sym- pathy for learners, and it is as clear as clear could be. Very pleasing is the impartial and tentative way in which rival

hypotheses arc presented, and there is an un-hasting antici- pation of " a period of comparative rest and reflection after the ebullient activity of the present time." The dedication to Sir Ernest Rutherford is a work of art.

There are various " atoms " or " atom-models " in the field—such as Lenard's and .T. J. 'I'homson's, Bohr's and Rutherford's—and their claims are carefully reviewed in Dr. Andrade's book. The question is to what extent the rival theories do their duty in representing the main phenomena such as the scattering of alpha and beta rays, and of X-rays, by matter ; radioactivity ; isotopes ; the periodic law ; and chemical valency. " An atom widel is only of use, and deserving of retention, when it describes quantitatively experimental observations, and proves fruitful in suggesting new lines of research."

The general picture of a heavy atom, such as radium, that the book leaves in one's mind is that of a planetary system with a central " sun " or nucleus. This positively charged nucleus, very small compared to the size of the atom as a whole, contains protons surrounded by a zone of electrons ; and beyond the nucleus, again, there arc outer electrons. The nucleus consists in part of somewhat stable helium atoms, each with four protons and two electrons ; and, further, there are comparatively loosely held protons that can be struck off from the nucleus of the atom of certain elements by swift alpha particles. The net positive charge of the nucleus is equal to the atomic number of the given element and determines the chemical and optical properties of the

atom ; the mass is concentrated in the nucleus, and may be changed without alteration of the charge, while the charge

may be altered without appreciably altering the mass. In the extra-nuclear portion of the atom there arc orbits of revolving or shells of stationary electrons—but for further exploration of these deep waters the utilization of a strong swimmer like Dr. Andrade must be earnestly recommended.