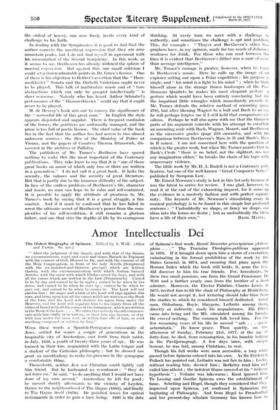 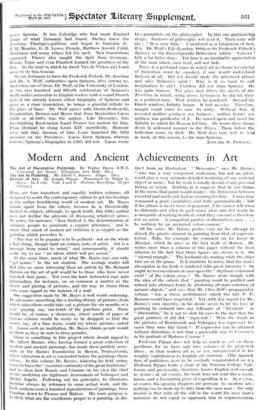 WITII these words a Spanish-Portuguese community of Jews, settled for scarce a couple of generations in the hospitable city of Amsterdam, cast forth from their midst, in July, 1656, a youth of twenty-three years of age. He was learned in their lore, acquainted with the Latin tongue and a student of the Cartesian philosophy ; but he showed too great an unorthodoxy to make his presence in the synagogue a comfortable thing.

Thenceforth, neither Jew nor Christian could lightly call him friend. But he harboured no resentment ; " they do not force roe," he said, " to do anything that I would not have done of my own accord." Amsterdam he left for good ; he moved shortly afterwards to the vicinity of Leyden, thence to the neighbourhood of The Hague (1663), and finally to The Hague itself (1670). He polished lenses for optical instruments in order to gain a bare living. 1063 is the date of Spinoza's first work, Renati Descartes principiorum philoso. phiae . . ." The Tractatus Theologico-politicus appeared in 1670. If it brought down upon him a storm of execration, culminating in the formal prohibition of the work by the States General, in 1674, and ensuring that place upon the Roman Index which the book still holds, it, none the less, did discover to him his true friends. For, hereabouts, he drew two small pensions, one from the Grand Pensionary De Witt and a further yearly sum from the brother of a dead admirer. Moreover, the Elector Palatine, Charles Lewis, in 1673, invited him to fill the chair of Philosophy at Heidelberg. He would not accept it, lest lecturing should take time from the studies to which he considered himself dedicated. Great men, Oldenburg, Boyle, Huygens, Leibnitz among them, directly or indirectly, made his acquaintance. His Ethicx came into being and the MS. circulated among his friends. He craved nothing. The common folk loved him. For time few• remaining years of his life he moved " sub . . soceie aeternitatis." He knew peace. Then quietly, on the afternoon of Sunday, February 21st, 1677, at the age of forty-four, he died, from consumption, in his humble lodging' in the Paviljoensgragt. A few days later, with simple honour, he was laid, among Christians, to rest.

Though- his full works were soon accessible, a long while passed before Spinoza entered into his own. As Sir Frederick Pollock has pointed out, Leibnitz was not fair to him ; Locke, without reading him, decried him ; Berkeley read hint and called him atheist ; the indolent Hume sneered at his " hideous hypothesis " ; Voltaire was lukewarm ; Kant ignored him. To Lessing and Goethe Spinoza owes the establishment Of fame. Schelling and Hegel, though they considered that they improved upon Spinoza, yet confessed in Spinozism the beginning of Philosophy. And from Hegel to Freudentlial and her present-day scholars Germany has knowa how to assess Spinoza. It was Coleridge who first made England aware of what Germany had found. Shelley knew the Tractatus Theologise politicos and began to translate it. F. D. Maurice, G. H. Lewes, Froude, Matthew Arnold, Caird, Martineau and many others felt the spell. New translations appeared. France also caught . the light from Germany. Henan, Taine and even Flaubert learned the greatness of the Jew. In the land in which he dwelt Van de Vloten and Land arose to do him honour.

We are fortunate to have Sir Frederick Pollock, Dr. Joachim and Dr. A. Wolf, authorities upon Spinoza, alive among us. And when one of them, Dr. Wolf, of the University of London, at this two hundred and fiftieth celebration of Spinoza's death makes accessible to English readers both a sound French text of the already known oldest biography of Spinoza and gives us a clear translation, he brings a graceful tribute to the place of fame. Dr. Wolf agrees with Dunin-Borkowski, Freudenthal, Meisma and Meyer that Jean Maximilien Lucas (1636 or 46-1697) was the author. Like Descartes, this free-thinking Rosicrucian found France too narrow for him. From Holland he stung Louis XIV mercilessly. Rumour even said that, because of him, Louis launched the 1672 invasion on the Provinces. Lucas knew Spinoza, whereas Colerus,Spinoza's biographer in 1705, did not. Lucas wrote

two pamphlets on the philosopher. In this one partisanship sleeps. Students of philosophy will read it. Then some will say : " It is very thin." Considered as a tabulation of fact, it is. Dr. Wolf's Life (London, 1910) or Sir Frederick Pollock's Spinoza or the Encyclopaedia Britannica article " Spinoza " tells a far fuller story. Yet here is an invaluable appreciation of the man which, once read, will not fade.

There is a profound sense in which all academic knowledge of Spinozism must be smashed, if one would understand Spinoza at all. Did not Jacobi study the uttermost phrase and miss Spinoza's spirit ? Why is it so hard to call imagination to aid ? Children did not shun Spinoza. lie was quite human. The glass dust litters the sheets of the Tractalus in which, rising above faetionism, he did his duty as a political man. That written, he pondered. Beyond his Dutch windows Infinity began. It had no edge. Therefore, naught could enter to mar its unity. Without flaw, it revealed neither goodness nor badness ; neither beauty nor ugliness was predicable of it. He mused upon and loved the Infinity to which his Reason led him. He wrote those things down in awkward manner in the Ethics. Then, before the bulb-time came, he died. Dr. Wolf does very well to lead us back, at this season, to the man Spinoza.