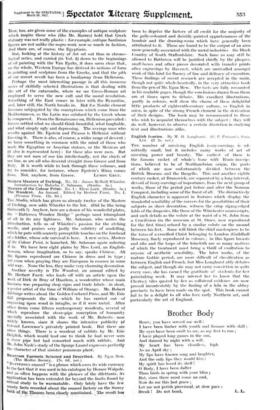 Battersea Enamels Selected and Described. By Egon Mew. (The Medici

to the fact that-it was used in his catalogue by Horace Walpole, and as often happens with the phrases of the dilettante, its application has been extended far beyond the limits found by critical study to be warrantable. Only lately have the few scanty facts recorded about the enamel factory on the Surrey bank Of Ac.„Thamcs heen.,e1psely scrutinized. The result has

been to deprive the factory of all credit for the majority of the gaily-coloured and daintily-painted appurtenances of the boudoir and the drawing-room which have generally been attributed to it. These are found to be the output of an area more generally associated with the metal industries--the Black Country of South Staffordshire. Such fame as may still be allowed to Battersea will be justified chiefly by the plaques, snuff-boxes and other pieces decorated with transfer prints after engravings by Ravenet, which are unrivalled amongst work of this kind for fluency of line and delicacy of execution. These findings of recent research are accepted in the main, though not quite whole-heartedly, in the very attractive book from the pen of Mr. Egan Mew. The facts are fully recounted in his readable pages, though the conclusions drown from them are at times open to debate. Ilis excellent • illustrations, partly in colours, well show the charm of these delightful little products of eighteenth-century culture, so English in mien, in spite of the strong French element in the derivation of their designs. The book may be recommended to those who wish to acquaint themselves with the subject ; they will do well, however, to observe a certain discretion in studying text and illustrations alike.