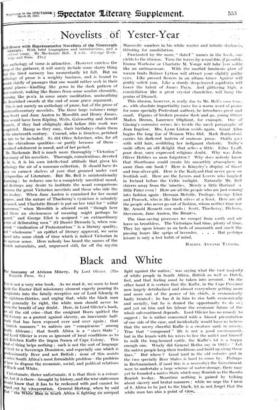 us is not a very wise book. As we read it, we seem to hear in the Exeter Hall missionary element eagerly pouring its mplaints into the fatally receptive ear of Lord Glenelg in he eighteen-thirties, and urging that, while the black man ust generally be right,, the white man should never be iren the benefifof any clOubt. Here, in I.Ord Olivier's book, all the old cries—that the emigrant Boers quitted the Id Colony as a protest against slavery, an inaccurate half- ruth that has been exposed over and over again ; that brutish manners " to natives are " conspicuous " among uth Africans ; that South Africa is a " slave State " ; d Lord Olivier is even so ignorant of local conditions as to I Kitchen Kaffir the lingua franca of Cape Colony. This Irld of thing helps nothing ; such is not the sort of language hold to a Sovereign Dominion, and especially one which is edomiriantly Boer and not British ; none of this assists s(Ilve South Africa's most formidable problemthe problem , how to dispoie the economic, social, and political relations 113lack and White.

Unfortunate, thrice unfortunate, it is that Ride is a r, but it is there—brought by history, and the wise statesman uld know that it has to be reckoned with ,and cannot be 'Ped out by vituperation. General Hertzog, when he said t"the -ftitilifitian-gOUth Africa if; fighting.ari oFequi.4 fight against the native," was saying what the vast majority of white people in South Africa, British as well as Dote!), feel, and that feeling must be taken into account. On the other hand it is certain that the Kaffir, in the Cape Province now largely detribalized and almost everywhere getting more and more out of the power of his chiefs,. is economically badly treated ; he Las it in him to rise both economically and socially, but lie is denied the opportunity to do so ; and yet on him and his labour the economic future of the whole sub-continent depends. Lord Olivier has no remedy to suggest : he is rather concerned with a biased presentation of one side of the ease, and incidentally would have its believe that the merry cheerful Kaffir is a creature sunk in misery. True that " compound " life is not a good environment. but in the kraals with his wives to hoe the millet and himself to milk the long-horned cattle, the Kaffir's lot is it happy enough one. Wisely did General Botha say in 1913 : Let the native people keep their traditions and build up along those lines." But where ? Good land in the old colonies and in the two specially Boer States is hard to conic by. Perhaps in Bechuanaland, if (and this is a necessity) the Government were to undertake a large scheme of water-storage, there may yet be founded a native State which may flourish as the Basuto flourish to-day. Meantime nothing is gained by talking about slavery and brutal manners ; while we urge the Union of S. Africa to be just to the black, let us not forget that the white man has also a point of view.