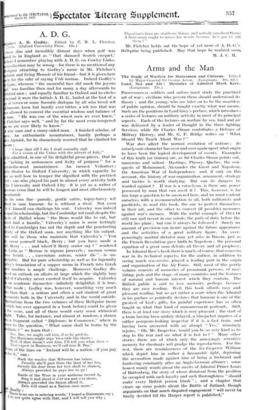 PROFESSIONAL soldiers and sailors must study the practica I art of war ; civilians who govern them should understand its theory ; and the young, who are later on to be the moulders

of public opinion, should be taught exactly what war means. Such are the positions in Lord Grey's preface, which introduce; a series of lectures on military activity in most of its principal aspects. Each of the lectures on warfare by sea, land and air was delivered by a leader of thought in the three lighting Services, while Sir Charles Oman contributes a Defence of Military History, and Mr. G. F. Bridge writes on " What Should We Teach About War ? "

War does affect the normal evolution of nations ; its cataclysmic character has over and over again upset what ought to have been the logical development of events. Examples of this truth (or truism) arc, as Sir Charles Oman points out, numerous and salient—Hastings, Plessey, Quebec, the con- quests of Mohammed, Alexander the Great and Napoleon, the American War of Independence-- and, if only on this account, the history of war-organization, armament, strategy and tactics is worth studying. But can its dangers be warded against ? If war is a cataclysm, is there any power possessed by man that can avert it ? This, however, is far too large a question to be answered here, and we must content ourselves with a recommendation to all, both militarists and pacificists, to read this book, the one to perfect themselves in their art, and the other to concert (if possible) measures against war's menace. With the awful example of I!114-lx still raw and recent in our minds, the path of duty before the world lies plain ; but can it always be followed ? Surely no amount of prevision can insure against the future appearance and the activities of a great military figure. An over- poweringly martial dictator may yet arise in Russia, just as the French Revolution gave birth to Napoleon ; the personal equation of a great man defeats all theory and all prophecy.

In Admiral Kerr's book there is much, of course, t hat concerns war in its technical aspects, for the author, in addition to seeing much sea-service, played a leading part in the origin and organization of the Air Force. Still, most of this portly volume consists of memories of prominent persons, of race- riding, polo and the stage, of many countries and the features of natural and human interest which they contain. The British public is said to love memoirs, perhaps because they are easy reading. %Veil, this hook affords easy and pleasant reading, but we get rather a scare when the Admiral in-his preface so pointedly declares that humour is one of the greatest of God's gifts, for painful experience has so often taught us what that kind of announcement portends. Still, there is at least one story which is very pleasant ; the start of a train having been unduly delayed, a bluejacket inquires of a rather pompous-looking inspector if it is a fast train, and having been answered with an abrupt " Yes," winningly rejoins, " Oh, Mr. Inspector, would you be so very kind as to

step to the rear and see what it is fast to ? " Many other stories there are of which only the annoyingly retentive memory for chestnuts will grudge the reproduction. For the rest, there are reminiscences of the Ex-Emperor Willisun which depict him in rather a favourable light, deploring the accusation made against him of being a firebrand and hankering constantly after an Anglo-Gennan alliance ; some holiest manly words about the merits of Admiral Prince Louis

of Battenberg, the story of whose dismissal from the position he occupied with such loyalty and such thoroughness " should make every British person blush " ; and a chapter that clears up some points about the Battle of Jutland, though arguments. on -that much disputed engagement " will never be finally decided till the Harper report is published."