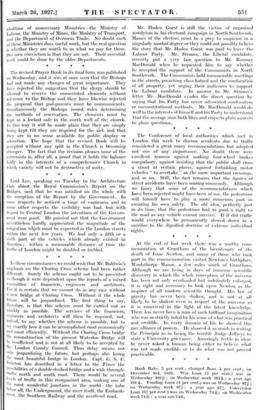 Page 3, 26 March 1927 — Lord .Lee, speaking on Tuesday to the Architecture Club about
Close

Lord .Lee, speaking on Tuesday to the Architecture Club about

the Royal Commission's Report on the Bridges, said that he was satisfied on the whole with the reception of the Report by the Government. In some respects he noticed a tinge of vagueness and in some other respects the visibility was bad, but with regard to Central London the intentions of the Govern- ment were good. He pointed out that the Government nevertheless hardly appreciated the magnitude of the congestion which must be expected in the London streets within the next few years. We had only a fifth or a sixth part of the vehicles which already existed in America ; within a measurable distance of time the traffic of London might be doubled or trebled.