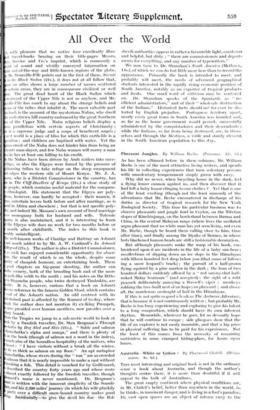 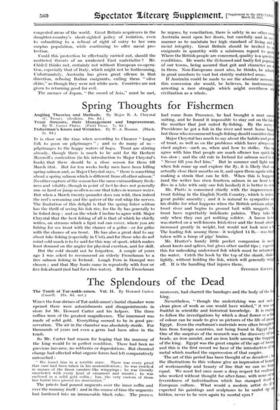 Tins most interesting and original book is not in the

ordinary sense a book about Australia, and though the author's thoughts centre there, it is more than doubtful if it will appeal to the bulk of Australians.

The great empty continent where physical conditions are, in Mr. Chidell's belief, better than anywhere in the world, is, he thinks, in imminent danger, and is living in a fool's paradise. Its vast- open spaces are an object of intense envy to the

congested areas of the world. Great Britain acquiesces in the daughter-country's short-sighted policy of isolation, even to submitting to a refusal of right of entry to her own surplus population, while continuing to offer naval pro- tection.

Could this 'protection be effectually carried out, should the muttered threats of an awakened East materialize ? Mr. Chidell thinks not, certainly not without European co-opera- tion, especially that of Italy, which might not be forthcoming. Unfortunately, Australia has given great offence in that direction, refusing Italian emigrants, calling them " olive skins;" as though they were not white men. Countries are not given to returning good for evil.

The menace of Japan, " the sword of Asia," must be !net, he argues, by conciliation, there is safety in no other colt, Australia must open her doors, but carefully and in soli manner as to maintain her high standard of living and i! racial integrity. Great Britain should be invited to se, emigrants in quantity with a minimum regard to (oak Where the British people are concerned, quality is a question conditions. He wants the ill-housed and badly fed popuiabi of our towns, being assured that grit and character are sM in them. Non-Europeans must also, he thinks, be admitti in great numbers to vast but strictly restricted areas.

If Australia could be made to see the absolute necessity this concession she would, he believes, be instrumental arresting a race struggle which might overthrow wb civilization as a whole.