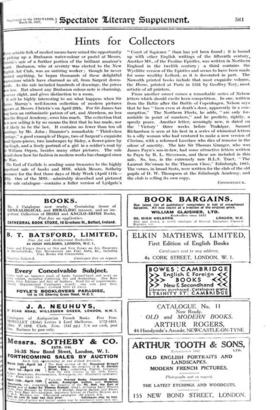 kNy artistic folk of modest means have seized the opportunity

• picking up a Brabazon water-milder or pastel at Mes;srs. hristie's sale of a further portion of the brilliant amateur's rd. Brabazon, who at seventy Vas elected to the New olish Art Club, was an untiring worker ; though he never shed anything, he began thousands of these delightful pressions which have charmed us all, from Sargent down- rds. As the sale included hundreds of drawings, the prices re low. But almost any Brabazon colour-note is charming, sever slight, and gives distinction to a room.

It will be highly interesting to see what happens when Sir nes Murray's well-known collection of modern pictures pears at Messrs. Christie's on April 29th. For Sir James has ng been an enthusiastic patron of art, and Aberdeen, no less n the Royal Academy, owes him much. The collection that is now selling is by no means the first that he has made, nor it likely to be the last. It contains no fewer than ten oil ntings by Mr. John ; Daumier's remarkable " Third-class rriage," a good example of. Degas, two of Sargent's exquisite all figure-pieces, two landscapes by Sisley, a flower-piece by an Gogh, and a lively portrait of a girl in a soldier's coat by r 1Villiam Orpen, besides many other pictures. The sale Add show how far fashion in modern works has changed since le War.

The Earl of Carlisle is sending some treasures to the highly portant sale of books and MSS. which Messrs. Sotheby nounce for the first three days of Holy Week (April 11th- th). One of the MSS.—admirably described and pictured the sale catalogue—contains a fuller version of Lydgate's " Court of Sapience " than has yet been found ; it is bound up "With 'other English writings of the fifteenth century, Another MS., of the Pauline Epistles, was written in Northern England in the twelfth century ; a third contains the Wyclifite version of the Epistles and seems to have been made for some wealthy Lollard, as it is decorated, in part. The Naworth printed books include that most exquisite. vo1l,Ime, the Ilorac, printed at Paris in 1531 by Geoffrey Tory, most artistic of all printers.

From another owner comes a remarkable series of Nelson letters which should excite keen competition. In one, written from the Baltic after the Battle of Copenhagen, Nelson says that he has " been even at death's door, apparently in a con- sumption." The Northern Fleets, he adds, " are only for- midable in point of numbers," and he predicts, rightly, a speedy peace. Another letter, seemingly new, is dated on the ' Victory' three weeks before Trafalgar. Samuel Richardson is seen at his best in a series of whimsical letters to a silly woman who had ventured to make a new version of Clarissa, with a reformed Lovelace who dies of remorse in the odour of sanctity. The late Sir Thomas Granger, who was James Payn's son-in-law, had some attractive letters written to Payn by R. L. Stevenson, and these are included in this sale. So, too, is the extremely rare R.L.S. Tract, The Laureat Ste'enson to the Thomson Class," Edinburgh, 1885. The verses, in broad Scots, were written for the club of the old pupils of D. W. Thompson at the Edinburgh Academy, and the club is selling its own copy.