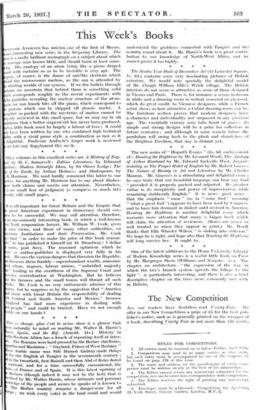 It is all-important for Great Britain and the Empire that

e great American experiment in democracy should con- cue to be successful. We may call attention, therefore, an uncommonly interesting book, in which a well-known (-w York corporation lawyer, Mr. William W. Cook, gives I' own views, and those of many other authorities, on oirrican Institutions and their Preservation. Mr. Cook ys that " in order to make the price of this book reason- Jle," he has published it himself (at 61 Broadway : 1 dollar I rents, post free). The reasoned optimism which he flaws as author-publisher. is displayed very fully in his ,ask. lie sees the various dangers that threaten the Republic, ad discusses them frankly--superabundant wealth, unassimi- ted aliens, negroes, labour unions, " unbridled majority !e" tending to the overthrow of the Supreme Court and leessive centralization at Washington. But he believes at the farmers and the small towns will thwart all such tacks. Mr. Cook is no very enthusiastic admirer of this tauitry. but he surprises us by the suggestion that " America 111 share with Great Britain the responsibility of dealing tls Central and South America and Mexico," because England has had more experience in dealing with eh people " and could be trusted. Have we not enough Aible on our hands ?