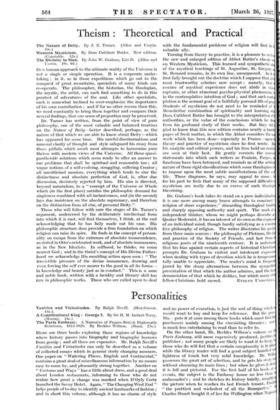 Theism : Theoretical and Practical The Nature of Deity. By

- los. ) Western Mysticism. By Dom Cuthbert Butler. New edition. (Constable. 128.) Oua. human approach to the ultimate reality of the Universe is not a single or simple operation. It is a corporate under- taking ; in it, as in those expeditions which go out to the conquest of great mountains, specialists of many kinds can co-operate. The philosopher, the historian, the theologian, the mystic, the artist, can each find something to do in this greatest of adventures of the soul. Like other specialists, each is somewhat inclined to over-emphasize the importance of his own contribution ; and if for no other reason than this, we need constantly to bring them together and compare their several findings, that our sense of proportion may he preserved.

Dr. Turner has written, from the point of view of pure philosophy, one Of the most valuable and balanced treatises on the Nature of Deity—better described, perhaps, as the nature of that which we are able to know about Deity—which has appeared for some time. His careful discriminations and unusual clarity of thought and style safeguard his essay from those pitfalls which await most attempts to harmonize pure theism with modern views of the Universe. All those quasi- pantheistic solutions which seem ready to offer an answer to our problems that shall be spiritual and reasonable too ; all vague notions of a self-evolving, struggling, suffering Creator ; all uncriticized monism, everything which tends to slur the distinctness and absolute perfection of God, is, after due discussion, decisively rejected by him. His aim is directed, beyond naturalism, to a " concept of the Universe or Whole which (in the first place) satisfies the philosophic demand for singleness combined with all-inclusiveness, and (in the second) lays due insistence on the absolute supremacy, and therefore on the distinction front all else, of personal Deity."

Those who will follow with care the stages of Dr. Turner's argument, undeterred by the deliberately intellectual form into which it is cast, will find themselves, I think, at the end acknowledging that he has fully made out his case. His philosophic structure does provide a firm foundation on which religion can raise its spire. He finds in the concept of person- ality an escape from the extremes of absolute transcendence, as stated in Otto's celebrated work, and of absolute immanence, as in the New Idealists. In selfhood, he thinks, we come nearest God ; and in the theist's concept of His Divine Father- hood we acknowledge His moulding action upon men : " The irresistible pressure of the divine immanence, drawing and even forcing the self ever nearer to the good in all its forms— in knowledge and beauty just as in conduct." This is a sane and noble book, written with a lucidity and literary skill too rare in philosophic works. Those who are called upon to deal with the fundamental problems of religion will find in it valuable, ally.

Turning from theory to practice, it is a pleasure to welei the new and. enlarged edition of Abbot Butler's. classic IN on Western. Mysticism.. This learned and sympathetic std of the mystical teachings of St. Augustine, St. Gregory a St. Bernard remains, in its own line, unsurpassed. In it s first fully brought out the doctrine which I suppose that all most trustworthy scholars now accept : namely, tint essence of mystical experience does not abide in Aisie raptures, or other abnormal psycho-physical phenomena, I in the contemplative intuition of God ; and that such costO plation is the normal goal of a faithfully pursued life of pun Students of mysticism do not need to be reminded of t1 Benedictine combination of spirituality and learning 84 Dom Cuthbert Butler has brought to the interpretation of authorities, or the value of the conclusions which lie drat from his profound study of their works. But they will glad to know that this new edition contains nearly a hunch' pages of fresh matter, in which the Abbot considers the it work which has been done—especially in France--upon t theory and practice of mysticism since he first wrote. Ile his analytic and critical powers, and his firm hold on realitic are seen at their best. He gently corrects the exeessii statements into which such writers as Poulain, Farges, al Saudreau have been betrayed, and reminds us of the arbitrat nature of those rigid classifications which some theologians lo to impose upon the most subtle manifestations of the soul life. These diagrams, he says, may appeal to some ; hi for his part he feels that many of the supposed diffieultic3t mysticism are really due to an excess of such theologio theorizing.

Dr. Graham's book takes its stand on a pure individualise it is one more among many brave attempts to construct religion of sheer experience," discarding theological traditil and sharply opposing authority and spirit. . The work of independent thinker, whom we might perhaps describe as Quaker Modernist, it has an interest of its own as the.expressit of an individual mind, though hardly satisfying as a constrO tive philosophy of religion. The writer illustrates his positit from three main sources : the philosophy of Plotinus, the fai and practice of the Society of Friends, and . last from t religious poets of the nineteenth century. It is unfortuna that his bias against certain aspects of historical Christionil prompts Dr. Graham to violent and intolerant expres.siot when dealing with types of devotion which he is temperanr tally unable to appreciate. The reader's mind is frequent jarred by the sharp alternations between the sympathed presentation of that which the author admires, and the Iran denunciation of that which he dislikes, but which many of h fellow-Christians hold sacred. EVELYN UNDERHILL.