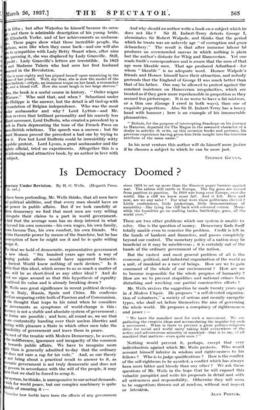 have been pretending, Mr. Wells thinks, that all men have 1 political abilities, and that every man should have an I power in public affairs. But if we look candidly at Bern democracy we find that most men are very willing abrogate their claims to a part in world government. find that the average man has no deep interest in what beyond his own concerns—his own wages, his own family, own Income Tax, his own comfort, his own friends. We him theoretic power by means of the franchise, but he has conception of how he might use it and he is quite willing esign it.

be ideal we hold of democratic, representative government new ideal. " Six hundred years ago such a way of haging"public affairs would have appeared fantastic. Ancient World knew nothing of such devices." Is it tble that this ideal, which seems to us so much a matter of tie, will be as short-lived as any other ideal ? And do not see signs around us that this hypothesis of equality outlived its value and is already breaking down ?

Jr. Wells sees great significance in recent political develop- ts in Italy, Russia, Spain and China. He confesses 4*If an unsparing critic both of Fascism and of Communism. the thought that leaps to his mind when he considers se movements as symptoms of world-change is this : Itocraey is not a stable and absolute system of government ; ter forms are possible ; and here, all round us, we see that rt are contentedly handing over their useless liberties and qIting with pleasure a State in which other men take the Possibility of government and leave them in peace. 'be root of the trouble with Modern Democracy, he asserts, the indifference, ignorance and incapacity of the common towards public affairs. We have to recognize more 114 than is generally admitted to-day that the ordinary tr does not care a rap for his vote." And, as our theory not bring about a practical result to answer to it, as oeratic government is not truly democratic and does not Y govern in accordance with the.will of the people, it may Pen that we shall be forced to scrap it.

tit system, he thinks, is unresponsive to our actual demands. wish for world peace, but our complex machinery is quite

liable of ensuring 1., Consider how feeble have been the efforts of any government

since 1918 to set up more than the flimsiest paper barriers against war. The sabres still rattle in Europe. The big Alms are moved from position to position. In 1910 war hung over Europe, over the world, like a cliff we knew must fall. And it fell. Here and now, are we any safer ? For what wore these politicians elected Little conferences, little junketings, little demonstrations of amiability—like tying the cliff back with coloured cotton. Mean- while the foundries go on making tanks, battleships, guns, all the world over."

There are two other problems which our system. is unable to solve. One is the question of money. Democracy finds itself totally unable even to conceive the problem. Credit is left in the hands of bankeiS and financiers, and passes completely beyond our control. The monetary policy of a nation may be beneficial or it may be mischievous ; it is certainly out of the hands of the ordinary government of the nation.

But the vastest and most general problem of all is the economic, political, and industrial organization of the world as a unit, of mankind as a race of beings. How are we to gain command of the whole of our environment ? How are we to become responsible for the whole progress of humanity How arc we to prevent stupidities and national crimes from disturbing and wrecking our partial constructive efforts ?

Mr. Wells revives the suggestion he made twenty years ago in A Modern Utopia. He proposes " a self-devoted organiza- tion of volunteers," a society of serious and morally energetic types, who shall set before themselves the aim of governing the whole world. He proposes a conspiracy of righteousness and peace :—

" We have the manifest need for such a movement. We are gathering the creative ideas and accumulating the impulse for such a movement. What is there to prevent a great politico-religious drive for social and world unity taking hold everywhere of thu active and adventurous minority of mankind—that is to say, of all mankind that matters—even quite soon ? "

Nothing would prevent it, perhaps, except that very

individualism against which Mr. Wells protests. Who would account himself inferior in wisdom and righteousness to his

fellows ? : Who is to judge qualifications ? How is the conflict of the self-righteous to be ayoided, a conflict which has always been more bitter and bloody than any other ? We ask these questions of Mr. Wells in the hope that he will expand this valuable pamphlet and write his proposals in detail and with all seriousness and responsibility. Otherwise they will seem to be suggestions-thrown out at random, without real import