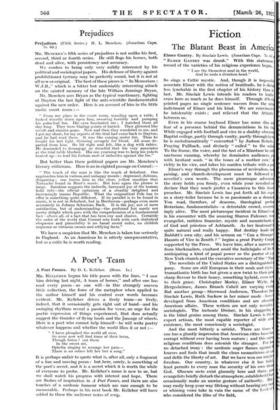 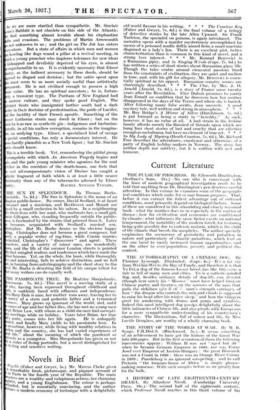 The Blatant Beast in America

Elmer Gantry. By Sinclair Lewis. (Jonathan Cape. 7s. " ELMER GANTRY was drunk." With this statement record of the varieties of his religious experience begins.

" I see the blessedest, soul in the world,

And he nods a drunken head."

So sings a Celtic mystic. And, though it is impossible associate Elmer with the notion of beatitude, he is distill less lynchable in the first chapter of his history than in last. Mr. Sinclair Lewis intends his readers to loathe crass hero as much as he does himself. Through 479 eln printed pages no single sentence wavers from the Wig indictment of Elmer and his kind. We are convinced he intolerably exists ; and relieved that the Atlantic between us.

Even in his coarse boyhood Elmer has some dim aoi fear of a presence behind the denunciations in his elm While engaged with football and vice iri a shabby obscurmi Baptist college, partly through vanity, partly through trysts he is melodramatically " converted " by Judson Roberts Praying Fullback, and divinely " called" to the minis To the frame, the voice, and the lust of a Minotaur he add - unctuous cunning, whereby he dominates audiences, p with hesitant souls " in the tones of a mother cow," richly in his vice, and takes his maiden tribute with a pra

Elmer's way through the phenomena of revivalism, nsi raising, and church-development must be followed in novelist's own words. The mere picaresque adventun the story holds you firmly, even while your revolted ne declare that they much prefer a Casanova to this Amer preacher. Mr. Sinclair Lewis has put forth all his expel as a story-teller because he is so passionate as a denune You read, therefore, of deacons, theological profal Rotarians, fundamentalists—a detestable crowd, overwlq ingly alive. The most picturesque incident in Elmer's a is his encounter with the amazing Sharon Falconer, wen evangelist, ruthless financier, mystic and mountebank, . of God and priestess of Ashtamth. As her lieutenant 4 quite natural and really happy. But destiny leads him Babbitt's own city, and his sermon on " Can a Stranger Haunts of Vice in Zenith ? " begins it great Purity Camp supported by the Press. We leave him, after a narrow ed from blackmailers, exultant amid the hallelujahs of his A anticipating a kind of papal power as the pastor of a New York church and the executive secretary of the " Nap The novelists of the United States are a distinguished q pany. Some are still European in their souls and styles. transatlantic birth has but given a new twist to their pets sharp flavour to their honey, something hybrid, even and to their grace. Christopher Morley, Elinor Wylie, JO Hergesheimer, James Branch Cabell are varying esatn1 But another group—Sherwood Anderson, Theodore Da Sinclair Lewis, Ruth Suckow in her minor mode—havei developed from American conditions and are absorbe American affairs. These writers are not only novelists sociologist's. The inchoate Dreiser, in his staggering is the blind genius among them. Sinclair Lewis is the expert artisan, the most capable reporter of wide are existence, the most consciously a sociologist.

And the most bitterly a satirist. There are times one has a ghastly impression that American cities have bee corrupt without ever having been mature ; and this sully religious conditions does astonish the stranger. For hel no detached irony : the sardonic anger flames against q knaves and fools that insult the clean monasticism of sa and defile the liberty of art. But we have won our intellect freedom. Our country, in whatever else it has failed least permits to every man the security of his own d God. Obscure sects exist gloomily here and there, evangelists briefly disturb the atmosphere, established Chua easily keep your way lifelong without hearing any ra, occasionally make an unwise gesture of authority. B may eas BU1 ti or whining voice take in vain the name of the Lord 01 who considered the lilies of the field.

So we are more startled than sympathetic. Mr. Sinclair wis's Babbitt is not obriblete on this side of the Atlantic.

• e find something almost lovable about his elephantine

s and evasions. The problems of Martin Arrowsmith not unknown to us ; and the girl on The Job has sisters .ervwhere. But a state of affairs in which men and women n howling like dogs round a pillar at a revival meeting, in jai a young preacher who implores tolerance for new ideas kidnapped and devilishly deprived of his eyes, is almost omprehensible to us. It is evidently necessary that Elmer ntry, as the indirect accessory to these deeds, should be posed to disgust and derision ; but the satire spent upon must seem to us more socially useful than artistically rinanent. He is not civilized enough to possess a high uric value. He has no spiritual ancestors ; he is, fortun- ly, a transient type. The Puritans of New England had austere culture, and they spoke good English. The lvinist Scots who immigrated farther south had a dark etry in their doctrine of predestination, the pride of Lucifer,

d the lucidity of their French apostle. Something of the sser Lutheran strain may dwell in Elmer ; but on the le he is as raw as synthetic gin—indigenous and barbarian. rtuffe, in all his mellow corruption, remains in the imagine- n. an undying type. Elmer, a specialized kind of savage special conditions, has only a documentary interest. He ms hardly plausible as a New York figure ; but Mr. Sinclair Iris should know.

This is a terrible book. Yet, remembering the pitiful group evangelists with which An American Tragedy begins and ds, and the pale young minister who agonizes for the soul Clive in the corridors of the death-house, one feels that

e vast all-compassionate vision of Dreiser has caught a !retie fragment of faith which is at least a little nearer ristianity than any of the tabernacles adorned by Elmer antrv. RACHEL ANNAND TAYLOR.