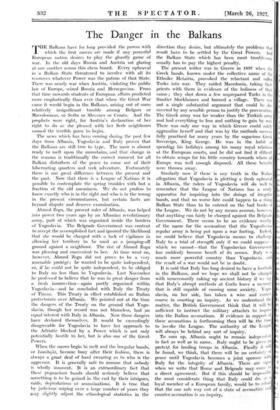 The Danger in the Balkans II IHE Balkans have for long

provided the pawns. with which the first moves are made if any, powerful European nation desires to play the ghastly game of war. In the old days Russia and Austria sat glaring at one another across this chess board. Every upheaval in a Balkan State threatened to involve with all its resources whatever Power was the patron of that State. There was nearly War when Austria, violating the public law of Europe, seized' Bosnia and Herzegovina. From that time onwards students of European affairs predicted more emphatically than ever that when the Great War came it would begin in the Balkans, arising out of some relatively insignificant trouble among Bulgars or Macedonians, or Serbs or Slovenes or Croats. And the prophets were right, for Austria's declaration of her right to do as she pleased with her Serb neighbours caused the terrible game to begin.

The news which has been coming during the past few days from Albania, Yugoslavia and Italy proves that the Balkans are still true to type. The snow is almost ready to melt upon the mountains, and that change in the seasons is traditionally the correct moment for all Balkan distthbers of the peace to conic out of their hibernating quarters and seek adventure. Fortunately there is one great difference between the present and the past. Now that there is a League of Nations it is possible to contemplate the spring troubles. with but a fraction of the old uneasiness. We do not profess to know exactly who is in the right and who is in the wrong in the present circumstances, but certain facts arc beyond dispute and deserve examination.

Ahmed Zogu, the present ruler of Albania, was helped into pouter two years ago by an Albanian revolutionary army, part of Which was organized inside the borders of Yugoslavia. The Belgrade Government was content to accept the accomplished fact and ignored the likelihood that she would be charged with a lack of vigilance in allowing her territory *to be used as a jumping-off ground 'against a neighbour. The rise of Ahmed Zogu was pleasing and ConVenient to her. As time went on, however, Ahmed Zogu did not prove to be a very amenable protege; he wanted to be quite independent, or, if he could not be quite independent, to he obliged to Italy no less than to Yugoslavia. Last November he professed to believe that he was in great danger from a fresh insurrection—again partly organized within Yngoslavia—and he concluded with Italy the Treaty of Tirana. This Treaty in effect established an Italian protectorate over Albania. We pOinted out at the time the dangers of the Treaty on the ground that Yugo- slavia, though her record was not blameless, had an equal interest with Italy in Albania. Now those dangers have declared themselves. It •would be exceedingly disagreeable for Yugoslavia to have her approach, to the Adriatic blocked by a Power which is not only potentially hostile to her, but is also 'one of' the Great Powers.

When the snows begin to. melt and the irregular bands; or komitajis, becothe buSY after their fashion, there• is always a great deal of hard swearing as to • who is the aggresSor. It is generally safe to assume that nobody is wholly innocent.. It is an extraordinary fact that these pugnacious bands 'should seriously believe that something is to be gained. in the end by their intrigues, raids, depredatiOns .assassinations. It true. that by judieious" sniping Over a large number of years they may slightly' adjust .the ethnological statistics in the direction thay desire, but ultimately the problems that result have to be settled by the Great Powers. And the Balkan State which has been most troubleso!] usually has to pay the highest penalty. • The present writer was in Greece in 1897 when Ili, Greek bands, known under the collective name of Ethnike Hetairia, provoked the reluctant and sullen Turks into war. They raided Macedonia, taking then. priests with them in evidence of the holiness of then. cause ; they shot down a few unprepared Turks in tb-- frontier blockhouses and burned a village. There win not a single. substantial argument that could be dk. covered by any sensible person to justify the provocation. The Greek army was far weaker_than the Turkish army and had. everything to lose and nothing to gain by war. was as only one way in which Greece could safelv aggrandize herself and that was by the, methods sueees• fully practised for many years by the sagacious Greek Sovereign, King George. He was in the habit (i spending his holidays among his many royal relations at the European courts, and he did not find it difficult to obtain scraps for his little country towards whom all Europe was well enough disposed. All these benefit, were thrown away.

Similarly now if there is any truth in the Italian allegation that Yugoslavia is plotting a fresh upheaval in Albania, the rulers of Yugoslavia will do_ well to remember that the League of Nations has a read:: apparatus for inquiring into the doings of irregular bands, and that no worse fate could happen to a rising Balkan State than to be entered on the bad books ot the League. We do not by any means assume, however that anything can fairly be charged against the Belgrol• Government. There seems h . to be no evidence wort of the name for the accusation that the Yugoslal regular army is being put upon a war footing. Indeed. we could believe that Yugoslavia means to ehalleng, Italy to a trial of strength only if we could suppose-- which we cannot—that the Yugoslavian Government has suddenly become bereft of its senses. Italy is a much more powerful country than Yugoslavia, and the result of a war would not be in doubt.

It is said that Italy has long desired to have a foothold in the Balkans, and we. hope we shall not be charged with unnecessarily raking up ancient history if we ca!' that Italy's abrupt methods at Corfu leave a memory that is still capable of causing some anxiety. Yugo• slavia, on her side, has .taken a wise and corre, course in courting an inquiry. As we understand the matter, the British Government think that it will be sufficient to instruct the military attaches to inquir into the Italian accusations. If evidence in support 01 these accusations is forthcoming then will be :the fink' to invoke the League. The antlicnitY of - the will always be behind any sort of inquiry. • To, sum up, Albania ought to remain independent in fact as well as in name. ItalY ought to be; veil no pretext for landing troops . in Albania. Filially. it will be found, we think, that 'there will he no certainty Of peace until Yugoslavia becomes a joint sponsor with Italy for - the . integrity of Albania. There - are signs inquiry. When we write that' Rothe' and_ Belgrade may come to a direct agreement. But if this should be impossible the most considerate thing that Italy could do, aS loyal member of a European family, would be to admit that the one safe way out of a state of _accusation and counter-accusation 'is 411