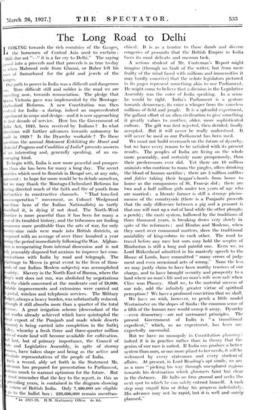 The Long Road to Delhi

OOKING towards the rich countries of the Ganges, the horsemen of . Central Asia used to -exclaim : " Dilli dur ast "—" it is a far cry to Delhi." The saying passed into a proverb and that proverb is as trite to-day Hs when Mahmud rode from Ghazni, or Baber left his races at Samarkand for the gold and jewels of the Ganges.

Our path to power in India was a difficult and dangerous olie. More difficult still and nobler is the road we are travelling now, towards renunciation. The pledge that Queen Victoria gave was implemented by the Montagu- thelmsford Reforms. A new Constitution was then nuked for India-it daring, indeed an unprecedented rxperiment in scope and design—and it is now approaching it, first decade of service. How has the Government of India Act, 1919, been received by Indians ? In what directions will further advances towards autonomy be made in 1929 ? Is the Dyarchy workable ? To these questions the annual Statement Exhibiting the Moral and Material Progress and Condition of India* presents answers of an interesting and, generally speaking, of an en- banging kind.

To begin with, India is now more peaceful and prosper- than she has been for many a long day. The secret moieties which used to flourish in Bengal are, at any rate, luiescent : to hope for more would be to delude ourselves, Hit we may thank the Montagu-Chelmsford Reforms for . ,aving directed much of the faith and fire of youth from Icstructive to constructive channels. " That tom-fool ma-co-operation " movement, as Colonel Wedgwood mute-time hero of the Indian Nationalists) so tartly ascribed it, is dying if not dead. The North-West metier is more peaceful than it has been for many a .ar of its troubled history, and the tribesmen are finding ,iiimerce more profitable than the arts of war, for only ocnty-nine raids were made into British districts, as .,nipared with an average of over three hundred a year bring the period immediately following the War. Afghan- ,tan is recuperating from internal dissension and is not Iv peaceably-disposed but anxious to improve*her Com- ianieations with India by road and telegraph. The ilrimage to Mecca (a great event in the lives of thou- dads of our Indian Moslem subjects) was accomplished safety. Slavery in the North-East of Burma, where the Hag's writ does not run, was abolished by negotiations ith the chiefs concerned at the moderate cost' of £8,000. (table improvements and extensions were carried out ipostal, wireless and telephonic services. The Military alget, always a heavy burden, was substantially reduced, Ithough it still-absorbs more than a quarter of the total reline. A great irrigation scheme (descendant of the u,t works already achieved which have quintupled the wat export of-the Punjaub and made whole deserts ,,som) is being carried into completion in the Sutlej alley, whereby a fresh three and three-quarter million res of waste land-will become Available for cultivation. (l last, -but of primary importance, the Council of ate and Legislative Assembly, in spite of stormy %oils, have taken shape and being as the active and - ieulate representatives of the people of India. Such a record, ably set forth in the Statement Mr. ateman has prepared for presentation to Parliament, Mains much to warrant optimism for the future. But ' Must remember that the key to the report, in this as Preceding years, is contained in the diagram showing voters- of BritiSh India. Only 7,400,000 are eligible go to the ballot box : 239;600,000 remain unenfran- • * In 1925-26. H.M. Stationery- Office. 4s. 6d. chised. It is as a trustee to these dumb and diverse congeries of peasants that the British Empire in India. faces its most delicate and onerous task.

A serious student of Mr. Coateman's Report might imagine (through no fault of the writer, but from mere frailty of the mind faced with millions and immensities it may hardly conceive) that the sedate legislators pictured in its ,pages represent soinething akin to our Parliament. He might conic to believe that a division in the Legislative Assembly was the voice of India speaking. In a sense he would be right. India's Parliament is a gesture towards democracy, its voice a whisper from the voiceless millions of field and jungle. It is a splendid experiment, the gallant effort of an alien civilization to give something it greatly values to another, older, more sophisticated culture. The gift was first rejected, then derided, finally accepted. But it will never be really understood. It will never be used as our Parliament has been used.

We must not build overmuch on the future of dyarchy, but we have every reason to be satisfied with its present results. The peoples of India are living on the whole more peaceably, and certainly more prosperously, than their predecessors ever did. Yet there are 10 million animists who continue to roam the jungles, often drinking the blood of human sacrifice ; there are 5 million saddlers and fakirs taking their beggar's-bowls from house to house as the companions of St. Franqis did ; there arc two and a half million girls under ten years of age who are married ; a literate farMer is still a strange pheno- menon of the countryside (there is a Punjaubi proverb that the only difference between a pig and a peasant is that one will root up a rod of land while the other ploughs a. perch) ; the caste system, hallowed by the traditions of three thousand years, is breaking down very slowly in spite of the reformers ; and Hindus and Moslems, when they meet over communal matters, show the traditional amiability of king-cobras to each other. The road to travel before any race but ours may hold the sceptre of Hindustan is still a long and painful one. Even we, as Lord Birkenhead admitted in masterly speech to the House of Lords, have committed " many errors of judg- ment and even occasional acts of wrong." None the less we may justly claim to have been worthy trustees of our charge, and to have brought security and prosperity to a land where no man's life and no man's wife were safe when Clive won Plassey, Shall we, to the material success of our rule, add the infinitely greater virtue of spiritual perception ? We have a profound conviction that we shall.

We have no wish, however, to perch a little model Westminster on the slopes of Simla : the common sense of a fifth of the human race would sweep it away. Dyarchy --even democracy—are not sacrosanct principles. The present Government of India is " a transitional . expedient," . which, as an experiment, has been un- . expectedly successful.

But we have no monopoly in Constitution planning : indeed it is in practice rather than in theory that the genius of our race is suited. If India can produce a better system than ours, or one more pliant to her needs, it will be welcomed by every statesman and every student of. affairs. At present, in Lord Reading's apt simile, we are as a man " picking his way through unexplored regions towards his destination which glimmers faint but clear in the distance. He halts on firm ground and seeks the. next spot to which he can safely entrust himself. A rash step may engulf him or delay. his progress indefinitely. His advance may not 'be-rapid; but it is -well and' surely- planned."