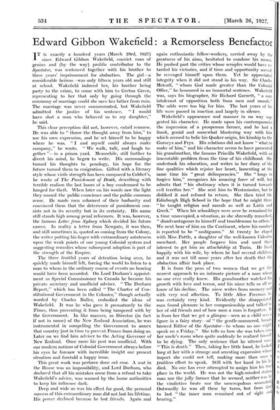 IT is exactly a hundred years (March 23rd, 1827) since Edward Gibbon Wakefield, convict man of genius and (by the way) prolific contributor to the Spectator, was sentenced together with his brother to three years' imprisonment for abduction. The girl—a considerable heiress—was only fifteen years old and still at school. Wakefield indueed her, his brother being party to the crime, to come with him to Gretna Green, representing to her that only by going through the ceremony of marriage could she save her father from ruin. The marriage was never consummated, but Wakefield admitted the justice of his sentence. " I would have shot a man who behaved so to my daughter," he said.

This clear perception did not, however, entail remorse. He was able to " throw the thought away from him," to use his own expression, and he set himself to be happy where he was. " I and myself could always make company," he wrote. " We walk, talk, and laugh to- gether "—in a prison yard. Meanwhile, still further to divert his mind, he began to write. His surroundings turned his thoughts to penology, his hope for the future turned them to emigration. Gifted with a literary style whose virile strength has been compared to Cobbet's, he wrote of The Punishment of Death, describing with terrible realism the last hours of a boy condemned to be hanged for theft. When later on his words saw the light they roused the public conscience and the public common sense. He made men ashamed of their barbarity and convinced them that the deterrence of punishment con- sists not in its severity but in its certainty. His name still stands high among penal reformers. It was, however, the famous Letter from Sydney which decided his future career. In reality a letter from Newgate, it was then, and still sometimes is, quoted as coming from the Colony, the writer putting his finger with extraordinary astuteness upon the weak points of our young Colonial system and suggesting remedies whose subsequent adoption is part of the strength of the Empire.

The three fruitful years of detention being over, he quickly made himself felt, forcing the world to listen to a man to whom in the ordinary course of events no hearing would have been accorded. On Lord Durham's appoint- ment as Special Commissioner to Canada he became his private secretary and unofficial adviser. " The Durham Report," which has been called " The Charter of Con- stitutional Government in the Colonies," though actually worded by Charles Buller, embodied the ideas of Wakefield. It was he who gave it prematurely to the Times, thus preventing it from being tampered with by the Government. In like manner, as Director (in fact if not in name) of the New Zealand Association, he was instrumental in compelling the Government to annex that country just in time to prevent France from doing so. Later on we find him adviser to the Acting Governor of New Zealand. Once more his post was unofficial. With our modern notions of Colonial Government always before his eyes he foresaw with incredible insight our present situation and foretold a happy issue.

This great work was perforce done sub rosa. A seat in the House was an impossibility, and. Lord Durham, who declared that all his mistakes arose from a refusal to take Wakefield's advice, was warned by the home authorities to keep his influence dark.

Deep and wide as was his effect for good, the personal success of this extraordinary man. did not.last his lifetime. His power declined because he lost friends. Again and again enthusiastic fellow-workers, carried away by the greatness of his aims, hesitated to condone his means. He pushed past the critics whose scruples would have re- tarded his victories, and if time and opportunity served, he revenged himself upon them. Yet he appreciated integrity when it did not stand in his way. Sir Charles Metcalf, " whom God made greater than the Colonial Office," he honoured in an immortal sentence. Wakefield was, says his biographer, Sir Richard Garnett, " a man intolerant of oPposition both from men and morals." The odds were too 'big for him. The last years of his life were passed in inaction and largely in silence.

Wakefield's appearance and manner in no way sug. gested his character. He made upon his contemporaries the impression of a prosperous farmer, and he had a frank, genial and somewhat blustering way with him which seemed to belie his Quaker origin, his kinship to the Gurneys and Frys. His relations did not know " what to make of him," and his character seems to have presented his grandmother, the famous Priscilla Wakefield, with an inscrutable problem from the time of his childhood. She undertook his education, and writes in her diary of the fine qualities which rejoice her heart, lamenting at the same time his " great delinquencies." She " longs to forgive him," recognizes his amazing force of will, but admits that " his obstinacy when it is turned towards evil terrifies her." She sent him to Westminster, but he disliked it and refused to return. She then tried the Edinburgh High School in the hope that he might there " be taught religion and morals as well as Latin and Greek." When his schooldays were over he remained for a time unoccupied, a situation, as she shrewdly remarked, " disadvantageous to himself and troublesome to others. We next hear of him on the Continent, where his conduct is reported to be " ambiguous." At twenty he eloped with Miss Pattle, a daughter of the well-known Calcutta merchant. Her people forgave him and used their interest to get him an attacheship at Turin. He lived happily with his wife, by whom he had several children, and it was not till some years after her death that the abduction affair took place.

It is from the pens of two women that we get the nearest approach to an intimate picture of a mart whom no one ever really knew. His grandmother watched his growth with love and terror, and his niece tells us all we know of his decline. The niece writes from memory and with very real affection. To little Alice Freeman he was certainly very kind. Evidently . the disappointed man found pleasure in -her companionship and talked to her of old friends and of how soon a man is forgotten. It is from her that we get a glimpse—seen as a child sees .a figure in a fairy story—of " the gentle-mannered, broad- browed Editor of the Spectator—to whom no one might speak on a Friday." She tells us how- she was taken into her uncle's room when quite suddenly, he realized himself to be dying. The only sentence that he uttered was " This is death." Then, taking her little hand, he looked long at her with a strange and arresting expression whose import she could not tell, making more than once 3 fruitless effort to speak. Still with her hand in his he died. No one has ever attempted to assign him his true place in the world. He was not the high-minded states- man nor the jolly farmer that he seemed, neither was lie the vindictive brute nor the unscrupulous scoundrel. Outwardly lie was all these by turns, but from first sight an to last " the inner man . remained out of S. hearing."