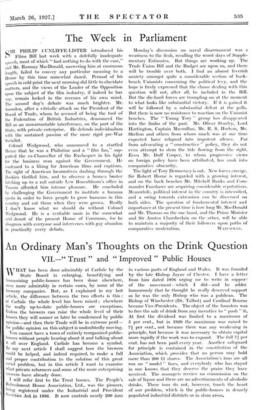 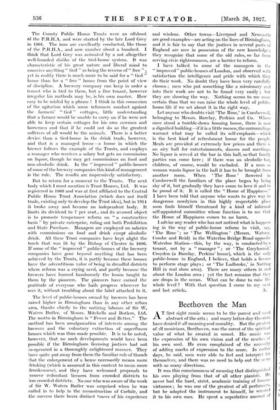 An Ordinary Man's Thoughts on the Drink Question

VII.—" Trust " and " Improved " Public Houses WHAT has been done admirably at Carlisle by the State Board in enlarging, beautifying and humanizing public-houses has been done elsewhere, even more admirably in certain cases, by some of the brewery companies. But, as I explained in my last article, the difference between the two efforts is this : at Carlisle the whole level has been raised ; elsewhere the really up-to-date public-houses are exceptions. Unless the brewers can raise the whole level of their houses they will sooner or later be condemned by public opinion—and then their Trade will be in extreme peril— for public opinion on this subject is undoubtedly moving.

You cannot have a town of entirely reorganized public- houses without people hearing about it and talking about it all over England. Carlisle has become a symbol. In my next article I shall suggest how the brewers could be helped, and indeed required, to make a full and proper contribution to the solution of this great Social problem, but in this article I want to examine What private reformers and some of the more enterprising brewers have already done. I will refer first to the Trust houses. The People's Refreshment House Association, Ltd., was the pioneer, being registered under the Industrial and Provident Sneleties Act in 1896. It now controls nearly 200 inns in various parts of England and Vales. It was founded by the late Bishop Jayne of Chester. I have a letter from him dated 1896 urging me to write in supporo of the movement—which I did—and he added humorously that he thought he really deserved support as he was the only Bishop who was a publican. The Bishop of Winchester (Dr. Talbot) and Cardinal Bourne became Vice-Presidents. The object of the founders was to free the sale of drink from any incentive to " push " it. At first the dividend was limited to a maximum of 5 per cent., but in 1920 the maximum was raised to 7i per cent., not because there was any weakening in principle, but because it was necessary to obtain capital more rapidly if the work was to expand. The full 7i per cent. has not been paid every year. Another safeguard for principle is contained in the constitution of the Association, which provides that no person may hold more than 200 £1 shares. The Association's inns are all run on " model " lines, and everybody who has stayed in one knows that they deserve the praise they have received. The managers receive no commission on the sale of liquor and there are no advertisements of alcoholic drinks. These inns do not, however, touch the heart of our problem, which is the public-houses in densely populated industrial districts or in slum areas. The County Public House Trusts were an offshoot of the P.R.H.A. and were started by the late Lord Grey in 1901. The inns are excellently conducted, like those of the P.R.H.A., and now number about a hundred. I think that Lord Grey was animated by a not altogether well-founded dislike of the tied-house system. It was characteristic of his great nature and liberal mind to conceive anything " tied " as being the reverse of " free " ; yet in reality there is much more to be said for a " tied " house than for a " free " house from the point of view of discipline. A brewery company can keep in order a tenant who is tied to them, but a free tenant, however irregular his methods may be, is his own master. How easy to be misled by a phrase ! I think in this connexion of the agitation which some reformers conduct against the farmers' " tied " cottages, little understanding that a farmer would he unable to carry on if he were not able to keep certain cottages for his own cowmen and horsemen and that if he could not do so the greatest sufferers of all would be the animals. There is a better device than a tied-house in the drink trade, however, and that is a managed house—a house in which the brewer follows the example of the Trusts, and employs a manager who receives a salary but gets no commission on liquor, though he may get commissions on food and non-alcoholic drink. In the " improved " public-houses of some of the brewery companies this kind of management is the rule. The results are impressively satisfactory.

But to return for a moment to the Trusts. The next body which I must mention is Trust Houses, Ltd. It was registered in 1903 and was at first affiliated to the Central Public House Trust Association (which does not itself trade, existing only to develop the Trust idea), but in 1914 it broke away and became an independent body. It limits its dividend to 7 per cent., and its avowed object is to promote temperance reform on " a constructive basis " by private enterprise, ruling out both Prohibition and State Purchase. Managers are employed on salaries with commissions on food and drink except alcoholic drink. All these Trust companies have kept alight the torch that was lit by the Bishop of Chester in 1896. If some of the " improved " public-houses of the brewery companies have gone beyond anything that has been achieved by the Trusts, it is partly because these houses have the adventitious value of being in dreadful districts where reform was a crying need, and partly because the brewers have learned handsomely the lesson taught to them by the pioneers. The pioneers have earned the gratitude of everyone who hails progress wherever he sees it, without troubling about the label attached to it.

The level of public-houses owned by brewers has been raised higher in Birmingham than in any other urban area, thanks chiefly to the untiring labours of Sir W. Waters Butler, of Messrs. Mitchells and Butlers, Ltd. The motto in Birmingham is " Fewer and Better." The method has been amalgamation of interests among the brewers and the voluntary extinction of superfluous houses which was thus made possible. It is to be noted, however, that no such developments would have been possible if the Birmingham licensing justices had not co-operated in a thoroughly enlightened manner. They have quite put away from them the familiar rule of thumb that the enlargement of a house necessarily means more drinking (which is assumed in this context to mean more drunkenness), and they have welcomed proposals .to remove - redundant licences from crowded districts to less crowded districts. No one who was aware of the work of Sir W. Waters Butler was surprised when he was called in to help in the reconstruction of Carlisle, - and the success there bears distinct traces of his experience and wisdom. Other towns—Liverpool and Newcastle are good examples—are acting on the lines of Birmingham, and it is fair to say that the justices in several parts of England are now in possession of the new knowledge ; they recognize that some of the old rules, so far from serving civic righteousness, are a barrier to reform.

I have talked to some of the managers in the " improved" public-houses of London, and observed with satisfaction the intelligence and pride with which they do their work. No doubt they have been very carefully chosen ; men who put something like a missionary zeal into their work are not to be found very easily ; but they are showing the way. Nothing seems to me more certain than that we can raise the whole level of public- house life if we set about it in the right way.

Let anyone who doubts visit ' The Rose,' in Camberwell, belonging to Messrs. Barclay, Perkins and Co. Where once stood a tumble-down boozing house, there is now a dignified building—if it is a little rococo, the surroundings warrant what may be called its self-emphasis—which is the best kind of refreshment house for the people. Meals are provided at extremely low prices and there an airy hall for entertainments, dances and meeting,, No liquor is served at the bar in this hall, so that family parties can come here ; if there was an alcoholic bar, children, of course, would be excluded. If a man of woman wants liquor in the hall it has to be brought from another room. When ' The Rose ' flowered in Camberwell the familiars of the place began by being shy of it, but gradually they have come to love it and to be proud of it. It is called the " Home of Happiness." I have been told that anyone who wants to give way to dangerous rowdyism in this highly respectable place soon finds himself threatened by a kind of informal self-appointed committee whose function is to see that the Home of Happiness comes to no harm.

I advise any reader who has not noticed what is happen. ing in the way of public-house reform to visit, say, ' The Rose' ; or ' The Wellington' (Messrs. Watney, Combe and Reid) in the Waterloo Bridge Road opposite Waterloo Station—this, by the way, is conducted by a tenant, not by a " manager " ; or ' The Greyhound,' Croydon (a Barclay, Perkins' house), which is the only public-house in England, I believe, that holds a licence to perform stage plays ; or ' The Ladbroke,' in Notting Hill (a -real slum area). There are many others in and about the London area ; yet the fact remains that they are drops in the ocean. What can be done to raise the whole level ? With that question I come to my nest