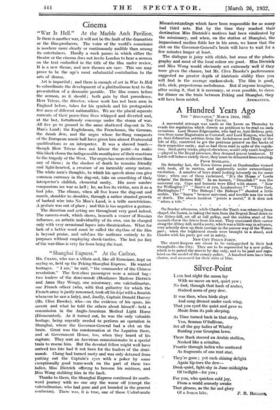 "Shanghai Express." At the Carlton.

Ma. Cl/ANC, who was a villain and, like all Eurasians, kept on saying so, held up the Peking-Shanghai Express. He wanted hostages. " I am," he said, " the commander of the Chinese revolution." The first-class passengers were a mixed bag : two leaders of the demi-monde (Mesdames Marlene Dietrich and Anna May Wong), one missionary, one valetudinarian, one French officer (who, with that gallantry for which the French army is justly renowned, took off his kepi with a flourish whenever he saw a lady), and, finally, Captain Donald Harvey (Mr. Clive Brooke), who—on the evidence of his spurs, his accent and what he told the others about himself—held a commission in the Anglo-American Medical Light Horse (Dismounted). As it turned out, he was the only valuable hostage, being urgently needed to perform an operation in Shanghai, where the Govemor-General had a clot on the brain. Great was the consternation at the Legation there, and at Government House, too, when they heard of his capture. They sent an American commissionaire in a special train to rescue him. But the devoted fellow might well have arrived too late had it not been for the leaders of the demi- monde. Chang had turned nasty and was only deterred from putting out the Captain's eyes with a poker by some exceptionally good team-work on the part of these two ladies, Miss Dietrich offering to become his mistress, and Miss Wong stabbing him in the back.

Thanks to them, the Shanghai Express continued its south- ward journey with no one- any the worse off (except the valetudinarian, who had gone and got branded in the general coufusion). There was, it is true, one of those Unfortunate Misunderstandings -which have been responsible for so many bad third acts. But by the time they reached their destination Miss Dietrich's motives had been vindicated by the missionary, and when, on the station at Shanghai, the impassioned medico folds her in his arms, we know that the clot on the Governor-General's brain will have to wait for a few minutes longer at least.

The dialogue is juicy with elides, but some of the photo- graphy and most of the local colour are good. Miss Dietrich and Miss Wong would obviously act extremely well if they were given the chance, but Mr. Clive Brooke's performance suggested no greater depth of histrionic ability than you will find in the average. cuckoo-clock. The film is good, rich, slick, preposterous melodra.ma. But if anyone imagines,. after seeing it, that it is necessary, or even possible, to dress for dinner on the train between Peking and Shanghai, they