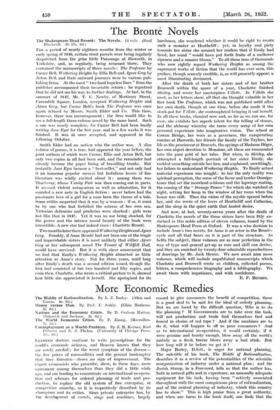 The Shakespeare Head Bronte: The Novels. 11 vols. (Basil Blackwell. £6 17s. 6d.) Von a period of nearly eighteen months from the winter or early spring of 1846, certain stout parcels were being regularly despatched from the grim little Parsonage at Haworth, in Yorkshire, and, as regularly, being returned there. They contained the manuscripts of three novels : The Professor by Currer Bell, 'Fathering Heights by Ellis Bell and Agnes Grey by Acton Bell, and their outward journeys were to various pub- lishing firms. At the most " two hard hopeless lines " from the publisher accompanied their invariable return : he regretted that he did not see his way to further dealings. At last, in the summer of 1847, Mr. T. C. Newby, of Mortimer Street, Cavendish Square, London, accepted 'Fathering Heights and Agnes Grey, but Currer Bell's book The Professor was once again refused by Messrs. Smith Elder and Co. This time, however, there was encouragement : the firm would like to see a full-length three-volume novel by the some hand. Such a one was nearly complete, for Currer Bell had been busily writing Jane Eyre for the last year, and in a few weeks it was finished. It was at once accepted, and appeared in the fallowing October.

Smith Elder had no notion who the author was. A slim volume of poems, it is true, had appeared the year before, the joint authors of which were Currer, Ellis and Acton Bell, but only two copies in all had been sold, and the remainder had already become the paper lining of travelling trunks. But instantly Jane Eyre became a " best-seller," and not only had it an immense popular success but fastidious lovers of fine literature was wildly excited about it : among them was Thackeray, whose Vanity Pair was then coming out in parts. It amused violent antagonism as well as admiration, for it sounded a new note in English fiction : never before had the passionate love of a girl for.a man been the theme of a tale. Some critics suspected that it was by a woman : if so, it must be by one who had forfeited the esteem of her own sex. Victorian delicacies and pruderies were shocked : girls were not like that in 1847. Yet it was no use being shocked, for the power and the intense moral beauty of the book were irresistible. A new star had indeed risen : Charlotte Bronte.

Two months later there appeared "Fathering Heights and Agnes Grey. Frankly, if Anne Brontii had not been one of the tragic and imperishable sisters it is most unlikely that either Agnes Grey or her subsequent novel The Tenant of H'ildfell Hall, -would have survived. But it is with sheer amazement that we find that Emily's 'Fathering Heights attracted as little attention as Anne's story. Not for three years, until long after Enail:,,,s death was a second edition issued, though the first had consisted of but two hundred and fifty copies, and even then, Charlotte, who wrote a critical preface to it, showed how little she appreciated it herself. She apologized for its harshness, she wondered whether it could be right to create such a monster as Heathcliff : yet, in loyalty and piety towards her sister she assured her readers that if Emily had lived, her mind " would have put forth fruits of a mellower ripeness and a sunnier bloom." To all those tens of thousands who now rightly regard "Fathering Heights as among the supremest works of fiction that the world has ever seen, this Preface, though scarcely credible, is, as will presently appear, a most illuminating document.

After the death of both her sisters and of her brother Branwell within the space of a year, Charlotte finished Shirley, and wrote her masterpiece Villette. In Vilielte she used, as her letters show, all that she thought valuable in her first book The Professor, which was not published until after her own death. though at one time, before she made it the stock-pot for Villette, she contemplated bringing it out herself. In all. these books, classical now and, as far as we can see, for ever, she exhibits her superb talent for the telling of stories, and the alchemy whereby she turns every scrap of her own personal experience into imaginative vision. The school at Cowan Bridge, her woes as a governess, the exasperating curates at Haworth, her friends the family of the Taylors, her life as the pensionnat at Brussels, the spyings of Madame Heger, her own abject devotion to Monsieur, all these are transmuted into the pure gold of her tales. But when, in Shirley, she attempted a full-length portrait of her sister Emily, she tackled something outside her ken, and explained, unwittingly, her failure to understand ',Fathering Heights. To Emily actual material experience was naught : to her the only reality was spiritual perception, the sense of the fierce and tender Omnipo- tence that set the moorland a-bloom and the lapwings mating, the coming of the " Strange Power " for which she watched at night, setting her lamp in the window of her room when the house was still. Then the vision of the mystic opened before her, and she wrote of the loves of Heathcliff and Catherine, and the sleep in the quiet earth that healed desire.

And now, at last, seventy-seven years after the death of Charlotte the novels of the three sisters have been fitly en- shrined in this noble edition of eleven volumes, issued by the Shakespeare Head Press at Oxford. It was a wise decision to include Anne's two novels, for Anne is an actor in the Bronte- cycle and all that bears on it is part of the structure. As befits the subject, these volumes are as near perfection in the way of type and general get-up as care and skill can devise, and they are enriched by twenty-four admirable reproductions of drawings by Mr. Jack Hewer. We now await nine more volumes, which will include unpublished manuscripts which Charlotte and Branwell wrote as children, collected poems, letters, a comprehensive biography and a bibliography. We await them with impatience, and with confidence.