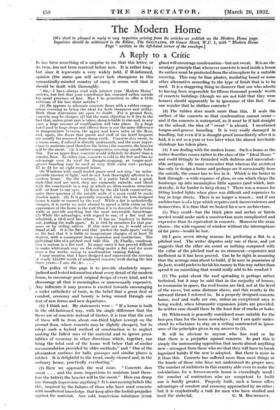 [We shall be pleased to reply to any inquiries arising from the articles we publish on the Modern Home page. Inquiries should be addressed to the Editor, The SPECTATOR, 99 Gower Street, W.C. 1, with " Modern Home Page " written in the left-hand corner of the envelope.]

A Reply to a Critic

IT has been something of a surprise to me that this letter, or its twin, has not been received before now. It is rather long ; but since it represents a very widely held, if ill-informed, opinion (the status quo will never lack champions in this romantically-minded country of ours), it seems well that it should be dealt with thoroughly.

Sir,—I have always road with interest your Modern Home' articles, but feel that your contributor has ventured rather outside his usual province of late. May I be permitted to offer a little criticism of his last three articles f

(1) He appears to advocate concrete floors with a rubber compo- sition covering as being the ideal for both cheapness and utility. Both these statements are open to doubt. For a ground floor, , concrete may be cheaper, (2) but the main objection to it lies in the fact that, unless great care is taken, damp is liable to rise and, in any case, a large amount of condensation will take place. In a large hotel (and in large shops and offices) there is not the same difference in temperatures between the upper and lower sides of the floor, and, again, the floors that guests and staff of the hotel frequent are usually far removed from damp earth. Concrete does sweat, in a warm room, if subsoil is directly underneath, and the more imper- vious to moisture (and therefore the better) the concrete, the heavier will be the sweat. (3) A rubber composition covering merely hides this. For an upper floor, concrete would definitely be dearer than a wooden floor. In either case, concrete is cold to the feet and has no advantage over its rival for draught-stopping, as tongue-and- groove boarding may be used at very little extra cost—perhaps £7 to £8 for an eight-roomed house.

(4) Windows with small leaded panes need not stop an unfor- giveable amount of light,' and do not 'look thoroughly affected in a modern house.' On the contrary, if a rustic brick and a good, dark-tiled roof are used, they are eminently suitable, and blend with the countryside in a way in which no ultra-modern structure will—at least to our eyes. (5) Even by the old brick construction, quite three-quarters of the outside walls of a room could be made window space. (6) It is generally conceded that the best-designed house is made or marred by the roof. While a flat is undoubtedly cheaper, it is surely no more absurd to spend a little extra on the appearance of the house in the roof than it is to decorate the interior walls or provide anything but the most serviceable furnishings. (7) While the advantages, with regard to sun, of a flat roof are admitted, a tiled roof has others. It has no tendency to flatten out, pushing the walls apart.' It is tied by members for that pur- pose, or by ceiling rafters. If this were not so, it would never stand at all. It is the flat roof that pushes the walls apart,' owing to the fact that it is liable to temperature changes of at least 70 degreets with a consequent large expansion and contraction. The individual tiles of a pitched roof take this. (8) Finally, condensa- tion is serious in a flat roof. In many cases it has proved difficult to make whitewash stay on the ceiling under a flat roof for more than a few weeks, owing to condensation causing flaking.

• I may mention that I have designed and supervised the erection of nearly £15,000 worth of reinforced concrete work during the last three years.—I am, Sir, &e. . . ."

The policy of this page is to provide absolutely unpre- judiced and tested information about every detail of the modern home, to encourage good, original design of every kind, and to

• discourage all that is meaningless or unnecessarily expensive. Any influence it may possess is exerted towards encouraging ft wider catholicity of taste, in the belief that a great deal of comfort, economy and beauty is being missed through our fear of new forms and new departures.

(1) I think not. My statements were : " If a house is built in the old-fashioned way, with the single difference that the floors are of concrete instead of timber, it is true that the cost of these will be from about one-third higher (except on the ground floor, where concrete may be slightly cheaper), but to adopt such a hybrid method of construction is to neglect making the fullest uses of the material and to ignore possi- bilities of economy in other directions which, together, can bring the total cost of the house well below that of similar accommodation provided by older methods," and " One of the pleasantest surfaces for halls, passages and similar places is rubber. It is delightful to the tread, easily cleaned and, in the ordinary house, practically everlasting."

(2) Here we approach the real issue. " Concrete does sweat . . and the more impervious to moisture (and there- fore the better) the heavier will be the sweat." How can damp rise through impervious anything ? It is unreasoning beliefs like this, inspired by the failures of those who have used concrete with insufficient knowledge, that keep alive the foolish prejudice against the material. Any cold 'impcivious substance (evea :used the material, G. M. Boutamingy. glass) will encourage condensation—but not sweat. It is an ele- mentgry principle that whenever concrete is used inside a house its surface must be protected from the atmosphere by a suitable covering. This may be lime plaster, insulating board or some other alternative according to the type of finish that is to be used. It is a staggering thing to discover that one who admits to having been responsible for fifteen thousand pounds' worth of concrete buildings (though we are not told that they were houses) should apparently be in ignorance of this fact. Can one wonder that he dislikes concrete ?

(3) The rubber does much more than this. It seals the surface of the concrete so that condensation cannot occur— and if the concrete is waterproof, as it must be if laid straight on the subsoil, the idea of " sweat " is absurd. I mentioned tongue-and-groove boarding. It is very easily damaged in handling, but even if it is draught-proof immediately after it is laid, it is not so a year or two later when the almost inevitable shrinkage has taken place.

(4) I am dealing with the modern home. Such a house as the writer describes comes rather in the class of the " Ideal Home " and could fittingly be furnished with dubious and uncomfort- able antiques. He must remember that whereas the architect has only to design a house and perhaps see it occasionally from the outside, the owner has to live in it. Which is the better to look through—a wide expanse of glass, or one which chops the landscape up into meaningless little squares (and which, inci- dentally, is far harder to keep clean) ? There was a reason for fitting leaded lights when glass was difficult and expensive to buy in large sheets. There is no longer a reason ; and if our architecture is of a type which requires such inconveniences and insincerities, it is time that we looked for a new architecture.

(5) They could—but the thick piers and arches or lintels needed would make such a construction more complicated and expensive than its equivalent in concrete. Moreover the main charm—the wide expanse of window without the interruptions of fat piers—would be lost.

(8) I gave seven strong reasons for preferring a flat to a pitched roof. The writer disputes only one of these, and yet suggests that the other six count as nothing compared with the value of the pitched roof as an ornament—expensive and inefficient as it has been proved. Can he be right in assuming that the average man about to build, if he were in possession of the facts, would prefer to lavish his money in this way rather than spend it on something that would really add to his comfort ?

(7) The point about the roof spreading is perhaps rather technical, but it may be said that in the majority of houses, to economize in space, the roof-beams are tied, not at the level of the eaves, but some distance above, and this results in the outward thrust I referred to. In a properly designed concrete house, roof and walls are one, unless an exceptional area is being roofed, when bitumastic expansion joints are provided. In neither case should there be the least fear of cracks or leaks.

(8) Whitewash is generally considered more suitable for the hen-pen than for the home nowadays ; but I can quite under- stand its reluctance to stay on a:ceiling constructed in ignor- ance of the principles given in my answer to (2).

It will be obvious to anyone who has read so far that there is a prejudice against concrete. In part this is simply the unreasoning opposition that meets almost anything new—strongest from those who see that they will have to break ingrained habits if the new is adopted. But there is more in it than this. Concrete has suffered more than most things at the hands of those who have not understood its proper uses. The number of architects in this country able even to make the calculations for a ferro-concrete house is exceedingly small ; the number of contractors who are competent to build one is hardly greater. Properly built, such a house offers advantages of comfort and economy approached by no other ; '-but it is miaphatically a tash for.men who 'have studied and