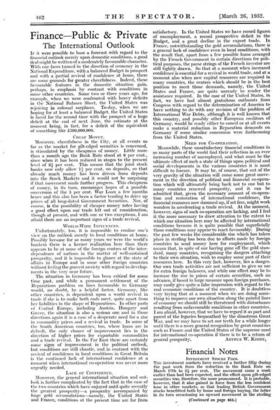 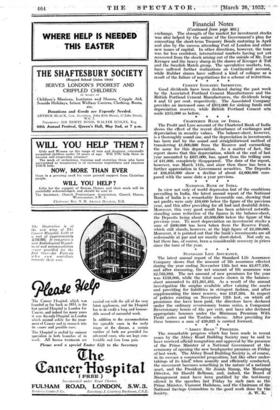 Tan investment markets have received a further fillip during the past week from the reduction in the Bank Rate on March 17th to 3} per cent. The movement came a week earlier than had been expected, and the effect upon gilt-edgM securities was, therefore, the more pronounced. it is probable, however,:that it also gained in force from the less confident tone in other markets, so that leading British Government stocks benefitted both by home and -foreign buying, the latter in its turn occasioning an upward movement in the sterling

Financial Notes (Continued from page 462.) ekehange. The strength of the-market for "investment stocks Was alai helped by the nature:Of the Government's plan for .converting the short-term Treasury Bimds maturing in April and also by the success attending Port of London and other new issues of capital. In other: directions, however, the tone was far less confident, international markets having not yet recovered from the shock arising out of the suicide of Mr. Iv,ar Kreuger and the heavy slump in the shares of Kreuger & Toll and the Swedish Match group. The speculative markets, too, have suffeied further realizations on Continental account, while Rubber shares have suffered a kind of collapse as a result of the failure of negotiations' for a scheme of restriction,