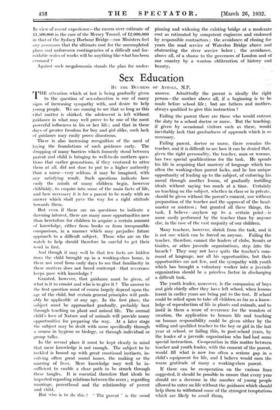 13 i"lr HE DUCI1ESS THE attention which at last is being gradually given 1 to the question of sex-education is one of many signs of increasing sympathy with, and desire to help young people. We are coming to see that so long as this vital matter is shirked, the adolescent is left without guidance in what may well prove to be one of the most powerful influences in his or her life; and that in these days of greater freedom for boy and girl alike, such lack of guidance may easily prove disastrous.

There is also increasing recognition of the need of laying the foundations of such guidance early. The dropping of many harriers which formerly stood between parent and child is bringing to well-to-do mothers ques- tions that earlier generations, if they ventured to utter them at all, did not dare to put to a higher authority than a nurse—very seldom, it may be imagined, with any satisfying result. Such questions indicate how early the minds of many children begin, however childishly, to enquire into sonic of the main facts of life, and how necessary it is for a parent to be ready with an answer which shall pave the way fur a right attitude towards them. • But even if there are no questions to indicate a dawning interest, there are many more opportunities now than heretofore for children to acquire a certain amount of knowledge, either from books or from irresponsible companions, in a manner which may prejudice future approach to a difficult subject. Those who are on the watch to help should therefore be careful to get their word in first.

And though it may well be that few facts are hidden from the child brought up in a working-class home, is there not need from early days to see that familiarity in these matters does not breed contempt—that reverence keeps pace with knowledge ?

Granted, however, that guidance must be given, of what is it to consist and who is to give it ? The answer to t he first question must of course largely depend upon the age of the child, but certain general principles will prob- ably be applicable at any age. In the first place, the subject must be approached gradually, probably best through teaching on plant and animal life. The normal child's love of Nature and of animals will provide many opportunities for preparing the way. At a later stage the subject may be dealt with more specifically through a course in hygiene or biology, or through individual or group talks.

In the second place it must be kept clearly in mind that mere knowledge is not enough. The subject to be tackled is bound up with great emotional instincts, in- volving often great moral issues, the making or the marring of lives. Mere knowledge may well be in- sufficient to enable a clear path to be struck through these tangles. It is essential therefore that ideals be imparted regarding relations between the sexes ; regarding marriage, parenthood and the relationship of parent and child.

But who is to do this ? " The parent is the usual

answer. Admittedly the parent is ideally the right person—the mother above all, if a beginning is to be made before school life ; but are fathers and mothers always qualified to give this instruction ?

Failing the parent there are those who would entrust the duty to a school doctor or nurse. But the teaching, if given by occasional visitors such as these, would inevitably lack that gradualness of approach which is so necessary.

Failing parent, doctor or nurse, there remains the teacher, and it is difficult to see how it can be denied that, given the right personality, the teacher, man or woman, has two special qualifications for the task. He spends his life in acquiring that mastery of language which too often the working-class parent lacks, and he has unique opportunity of leading up to the subject, of enforcing his moral through another lesson, of gradually instilling ideals without saying too much at a time. Certainly no teaching on the subject, whether in class or in private, should be given without the parent's consent, nor without preparation of the teacher and the approval of the head- master or mistress ; but granted all these things,. the task, I believe—anyhow up to a certain point Hs more easily performed by the teacher than by anyone else, in the ease of the vast majority of our children.

Many teachers, however, shrink from the task, and it is not one which can be forced on anyone. Failing the teacher, therefore, cannot the leaders of clubs, Scouts or Guides, or other juvenile organizations, step into the breach ? They may not have quite the teacher's com- mand of language, nor all his opportunitiis, but their opportunities are not few, and the sympathy with youth which has brought a voluntary worker into it juvenile organization should be a priceless factor in discharging a difficult task.

The youth leader, moreover, is the companion of boys and girls chiefly after they have left school, when lessons learnt in earlier years are being put to the test. If school could be relied upon to take all children as far as a know- ledge of reproduction of life in plants and animals, and to instil in them a sense of reverence for the wonders of creation, the application to human life and teaching on human responsibility could be given either by the willing and qualified teacher to the boy or girl in the last year at school, or failing this, in post-school years, by the leader of a juvenile organization who had had some special instruction. Co-operation in this matter between teacher and youth leader, with the consent of the parent, would fill what is now too often a serious gap in a child's equipment for life, and I believe would earn the warm gratitude of many a working-class parent.

If there can be co-operation on the various lines suggested, it should be possible to ensure that every year should see a decrease in the number of young people allowed to enter on life without the guidance which should help them to withstand some of the strongest temptations Which" are likely to assail thenii.